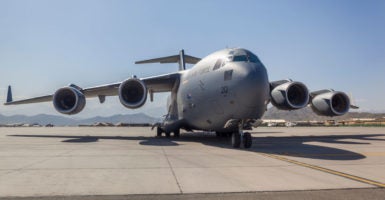 Military leaders have requested a new round of base realignment and closures so as to cut unnecessary costs and maximize the strategic value of military assets. (Photo: iStock Photos)

“The [base realignment and closures] process offers us the opportunity to address readiness by providing our forces the best possible ranges and installations for them to be stationed at.”

This is how Lucian Niemeyer, the new assistant secretary of defense for energy, installation, and environment, described the importance of Congress authorizing a new round of base realignment and closures (BRAC).

On Sept. 5, The Heritage Foundation hosted Niemeyer in a panel with the honorable Anthony Principi, chairman of the 2005 BRAC Commission and former secretary of the Department of Veterans Affairs, and Andrew Hunter, senior fellow at the Center for Strategic and International Studies.

What emerged from the discussions is the conclusion that there is no better tool available to the Department of Defense than BRAC to shape its real estate inventory.

The Department of Defense’s authorities are severely limited by current legislation, which effectively prohibits any base closures outside of the BRAC process, which was created in 1988.

For five years in a row now, the Pentagon has pleaded with Congress to authorize a new BRAC round, stating in certain terms that it will save billions of taxpayer dollars. This is the sixth year in which the request has been made.

As Congress returns from its August recess and gets ready to re-engage in the National Defense Authorization Act, it should grant the Department of Defense’s request and authorize a new round of BRAC.

According to an infrastructure capacity analysis from the Department of Defense, the department has over 20 percent excess capacity. Niemeyer expressed that the department is currently reworking its estimates using more updated force structure constructs, but that it remained certain of the need for a BRAC.

It is important to consider a new round of BRAC within the larger context in which the Pentagon operates, in anticipation of the release of new Trump administration national defense and national security strategies. These documents will inform how the Department of Defense shapes its real estate infrastructure.

As such, Niemeyer stated that “[f]or us [the Department of Defense] it’s not just a matter of finding efficiencies, it’s a matter of improving the military value and the effectiveness and lethality of our military forces.”

This increase in lethality and effectiveness will help the force structure better meet the demands of the administration’s new strategies. The BRAC process can have this dual emphasis on improving the military value of installations while rationalizing and reducing costs in real estate.

During the panel, Hunter stressed the importance of having congressional champions of the BRAC process in order to get it approved.

Currently, Sens. John McCain, R-Ariz., and Jack Reed, D-R.I., have proposed a bipartisan amendment to the National Defense Authorization Act that would authorize a new round of BRAC. This demonstrates that the Senate Armed Services Committee leadership is engaged and supportive of a new round.

On the House side, Rep. Adam Smith, D-Wash., also has a version of legislative language that would authorize a new round of BRAC.

In addition to the amendment process, when both chambers conference on this year’s National Defense Authorization Act, there will be time to add language that authorizes a new round of BRAC. It will all hinge on our current congressional leadership and the importance it places on finding efficiencies and optimizing our defense infrastructure.

Hopefully, Congress will understand the importance of a new round of BRAC and authorize a new one. Our warfighters and taxpayers deserve it.