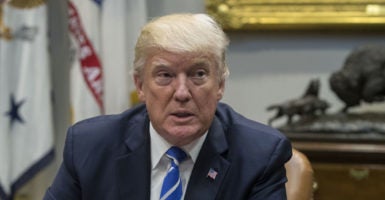 As Hurricane Irma bears down on Puerto Rico, home to 3.4 million U.S. citizens, President Donald Trump should prepare the way for a rapid relief and rebuilding effort by issuing an emergency waiver of the Jones Act.

The Jones Act (formally the Merchant Marine Act of 1920) requires that all shipping between U.S. ports be done by American-built and American-crewed vessels.

Although the requirement sounds like a job creator in theory, it has turned out to be a job destroyer in the U.S., diverting trade to other countries that are not covered by the Jones Act’s requirements.

In natural disasters, the Jones Act is especially onerous. Some qualifying vessels may be sidelined by the storm, and the disruption creates a need for a burst of resupplying and rebuilding following the disaster.

When Hurricanes Katrina and Rita battered the U.S. coast in 2005, President George W. Bush issued waivers of this kind, which added flexibility to the early recovery efforts without doing any long-term damage to U.S. shippers.

Keith Hennessey, who served in the Bush administration, outlined in detail how the administration went about enacting the waiver, including the need to brush back corporate lobbyists.

Hurricane Harvey, which has already disrupted much of the U.S. oil refining industry, created an unmet need for Jones Act waivers. Phillips 66 requested a waiver to keep open its Alliance Refinery, which employs 850 people in Belle Chasse, Louisiana.

If the president had issued a blanket waiver, Phillips 66 would have been able to maintain operations with a minimum of disruption.

For Trump, this is an opportunity to drain a corner of the swamp that profits from the misfortunes of Americans.

Acting immediately to waive the Jones Act will allow fuel, food, water, medicine, and rebuilding supplies to reach Puerto Rico with maximum speed and at the lowest cost.