There Is No Such Thing as a ‘Deserving Dreamer’ 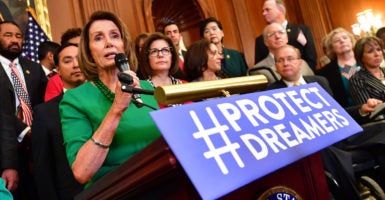 Over and over again, from the mouths of politicians in both parties, identity politics purveyors and cheap labor lobbyists, we hear the same refrains about President Barack Obama’s 800,000 amnestied illegal alien youths:

“They don’t deserve to be punished.”

“They deserve the American dream.”

Over and over again, in countless cookie-cutter op-ed pieces published over the past month, so-called Dreamers have vociferously lamented President Donald Trump’s push to eventually undo their unconstitutional five-year reprieves from deportation, plus coveted work permits:

“Dreamers like me have flourished under DACA (Deferred Action for Childhood Arrivals). Trump might take it all away.”

“If Trump ends DACA, Dreamers like me will return to a life of anxiety and doubt.”

“I feel exhausted, I feel frustrated, I feel angry, and in the worst moments, I feel helpless. I feel terrified that at any moment this program is going to be taken away and once again I won’t be able to work—how will I pay my bills? … What is going to happen to me if I get stopped on the street and I no longer have DACA? What’s going to happen to me if I get put into deportation proceedings and I don’t have thousands of dollars to hire an attorney to stay in this country?”

“I will lose my job, my ability to finish college, my driver’s license, and will be subject to deportation. I am not alone either. Almost 1 million young immigrants like myself will be affected in the same way and possibly even worse.”

Since when did DACA become the Depression and Anxiety Cure for Amnesty-seekers?

It’s this insatiable appetite for collective entitlement that demonstrates the perils of blanket amnesty. Give a privileged political class an inch and they’ll take, take, take until feckless public servants give away their country.

The proper response to illegal alien activists demanding that Washington act “Now!” to preserve their comfort, allay their anxieties, and extend their unconstitutional protections indefinitely is this:

Americans in uniform who’ve dedicated their lives to defending our nation are struggling to gain access to quality health care they’ve earned by action, not by accident or circumstance. Imagine their stress.

Five million American young people between 16-34 were unemployed last year and 50 million more are not even in the labor force. Imagine their anxiety.

Hundreds of thousands of law-abiding people from around the world are waiting patiently for their backlogged visa and green card applications to be reviewed. Imagine their frustration.

Why don’t their dreams come first?

House Minority Leader Nancy Pelosi called on House Republicans to help her “safeguard our young Dreamers from the senseless cruelty of deportation and shield families from separation and heartbreak.”

Never has this Bay Area elitist called on House Republicans to join her in shielding native-born and law-abiding immigrant families from the senseless and preventable violence committed by criminals in this country illegally who’ve caused immeasurable heartbreak for decades in her overrun California sanctuary.

You want to talk about families being separated? Try spending your holidays talking to a grave!

The left-wing Dream racket is a self-perpetuating political marketing machine. Its primary contribution to American society? Lashing out at how cruel, racist, ignorant, and ungrateful the rest of us are for not bowing down before the hallowed angel children of the Obama administration’s amnesty program.

It’s no coincidence that the publicity-hungry leaders of the Dreamer movement are full-time fulminators in government-funded academia, community organizing outfits, immigration law foundations, and the grievance-nursing media.

A deserving Dreamer would respect the sovereign right of an independent nation to determine who stays and who goes based on its national interest and constitutional obligations to put its citizenry first.

The deserving Dreamer, in other words, would admit he or she is owed nothing and deserves nothing.

There is no such thing as a “deserving Dreamer.”