Lawmaker Seeks to Derail $900M for Amtrak Project as Earmark 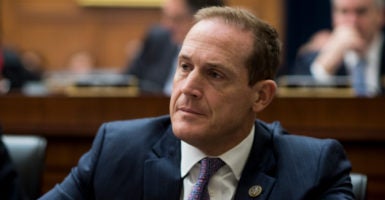 “We really think it is a clever way to move money around, and so that's what we'll call it,” says Rep. Ted Budd, R-N.C. (Photo:Bill Clark/CQ Roll Call/Newscom)

A North Carolina congressman is working to stop $900 million in a transportation funding bill bound for an Amtrak project in New Jersey that he says violates the House’s ban on earmarks.

“We are in the era of no earmarks and we certainly see one, essentially a $900 million earmark … called the Gateway Project,” Rep. Ted Budd, R-N.C., told The Daily Signal in a phone interview.

To block it, Budd is offering an amendment that would let other cities apply for some of the money.

The $900 million allocation would go to the $29.5 billion Gateway Project, a  tunnel, bridge, and related infrastructure upgrade proposed to improve Amtrak passenger service between New York City and Newark, New Jersey, according to Budd’s office.

“It’s slated for an upgrade of a rail line between New Jersey and New York City, so we see that as an earmark and we would rather direct half of that, so $450 million, to deficit reduction,” Budd said in the interview.

Earmarks, which direct taxpayer money to special interests and projects through the budget without competition based on merit, were banned under House rules in 2010. But, Budd argues, this allocation resembles an earmark.

Rep. Rodney Frelinghuysen, R-N.J., chairman of the House Appropriations Committee, allocated the $900 million to the Gateway Project in a transportation spending plan in July, as the New York Observer reported.

The Daily Signal requested comment from Frelinghuysen’s office on Budd’s amendment, but did not receive a response by publication deadline.

New Jersey planned a similar project, Budd’s office noted, but dropped it because of cost.

“New Jersey canceled this project, a very similar project in 2010,” Budd said. “So we think resurrecting this seven, eight years later is completely inappropriate and we hope to get a vote on this.”

Half of the $900 million allocated for the Gateway Project can be traced to eliminating funding for the U.S. Transportation Department’s Transportation Investment Generating Economic Recovery program, or TIGER, which pays for a wide variety of infrastructure projects.

The other half, according to Budd’s office, comes from diverting the bulk of new grant dollars for capital investment in light rail to the project.

“What I’m saying is, as long as we are going to do it, don’t concentrate it in that sector between New Jersey and New York,” said Budd, who represents the northern part of North Carolina. “Let other cities across the nation apply for it.”

A vote on Budd’s amendment was expected as early as Wednesday evening, according to his office.