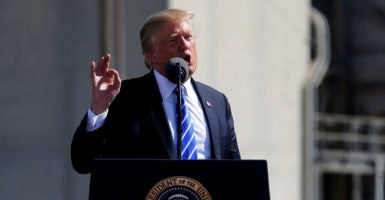 Both Republican and Democratic leadership were going to agree to disagree on a debt ceiling decision when President Donald Trump unexpectedly sided with the Democrats. (Photo: Jonathan Ernst/Reuters /Newscom)

President Donald Trump’s decision to side with Democrats in their push to attach a three-month debt ceiling increase to must-pass hurricane relief funding is not sitting well with House Republicans.

McConnell, Ryan, McCarthy, and Mnuchin were all in favor of raising the debt ceiling longer than Senate Minority Leader Chuck Schumer, D-N.Y., and House Minority Leader Nancy Pelosi, D-Calif., wanted, the source said. Republican leadership in Congress pitched the president on an 18-month, and later a six-month, raising of the debt ceiling, which Schumer and Pelosi refused to accept.

Both Republican and Democratic leadership at the meeting were going to agree to disagree when the president unexpectedly sided with the Democrats, the source said.

Instead of aligning with members of his own party and his administration, Trump agreed Wednesday afternoon to raise the debt limit and fund the federal government through mid-December, allowing members of Congress to deal with the federal budget in the coming months.

Trump’s decision directly conflicts with Ryan’s call for a long-term debt ceiling increase. He referred to Pelosi and Schumer’s proposal as “ridiculous and disgraceful” during his press conference ahead of the White House meeting.

The Wisconsin Republican alleged that Democrats were playing politics, arguing the three-month increase put the areas affected by the hurricanes at risk of not receiving the Federal Emergency Management Agency funding needed to begin recovering from the storms.

While GOP leadership supported combining long-term debt ceiling language with Harvey funding, conservative members—who have long pushed for spending cuts to a debt ceiling bill—blasted the idea, arguing that linking the two politicizes disaster funding, which would easily pass on its own. The Senate is slated to add language on the debt ceiling to the House-passed, stand-alone aid package before sending it back to the lower chamber.

Republican Study Committee Chairman Mark Walker, R-N.C., said he currently doesn’t think he can vote in favor of the deal.

“I’m hearing about it, my initial impulse is I’m not very pleased with it,” Walker said. “We will need to know a little more information, but just on the surface, obviously coming out of a classified hearing, but my first glimpse is I don’t know that I can support it.”

“Well, obviously the president had to make a decision because he was left with very few alternatives that were conservative solutions,” Meadows told reporters. “You know, it’s incumbent upon conservatives in Congress to put forth a plan that we can put on the president’s desk.”

Rep. Patrick McHenry, R-N.C., said that, while a longer timeframe would be more beneficial to the country, he believes the legislation will pass the lower chamber.

“In the broader interests of raising the debt ceiling, a longer time period gives the markets more certainty,” he told reporters. “But look, the White House and the president made a decision and I think we can be able to get this, we can get this done very quickly with very little drama.”

Juliegrace Brufke is a reporter for The Daily Caller News Foundation.