Tax Reform Will ‘Help Everyone,’ This Small-Business Owner Says 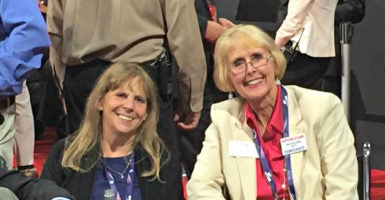 For one struggling business owner in America’s heartland, tax reform is a must.

Young, whose small commercial cleaning business is just months shy of turning 25 years old, was born and grew up in Sedalia, where she also lives.

She said her experiences with employees demonstrate the need for overhauling the nation’s tax code.

Young told the story of a former employee who would make up for money he lost in taxes by shopping at a food bank:

He told me that he would take his check stubs and show them how much money was taken out in taxes and … specifically get that much in food to help supplement. He was a divorced father, [paying] child support, still had to do all the things necessary to [support his family]. So he is going to a food bank, trying to make ends meet, and every time a new tax, an update would come, he would know to the dollar how much more was taken out of his checks.

Young’s business offers standard janitorial services in one industrial location and also contracts with places such as banks and factories.

In two locations, she said in the interview Thursday, her business just breaks even.

The company comes out with zero at the end of the year. There is nothing because we have been there a long time with no raise; we know that there won’t be a raise. But because of the dedication of my employees at these locations, as long as we can stay within the amount of money we are given, we just do it, because I want them to keep working.

She said she has no plans to leave these customers, but carefully weighs the cost of operating without making a profit.

“I take into consideration everything it costs me for those employees to work,” Young said:

An employee costs me more than say $10 an hour. When you take everything into consideration, as long as it’s not costing me, then we just do what we can and cut every corner we can and do our job well and everybody is still happy and then are still able to work.

The last time the tax code was updated was in 1986, with President Ronald Reagan’s Tax Reform Act.

At a July event hosted by Freedom Partners Chamber of Commerce and Americans for Prosperity, Treasury Secretary Steve Mnuchin said tax reform would happen within the year.

Trump is scheduled to speak about the need for tax reform Wednesday at an event in North Dakota.

If Congress passes tax reform, Young said, she will be able to make a profit on jobs like those she described.

In an Aug. 22 speech, House Speaker Paul Ryan, R-Wis., said lowering tax rates would be a priority for Congress.

Young likes the sound of that.

“For me, if they are going to lower my tax rate as the sole proprietor, then that means that at some point, I end up with more money, which makes it look like at some point that I have made money on these particular jobs,” Young said.

A sole proprietorship exists solely at the discretion of the business owner, with profits and losses calculated as part of the individual’s personal income tax return, according to Entrepreneur.com.

“For them personally, they are going to get more money to take home and spend, and then they put that back into the economy,” she said.

First, most people think about how tax cuts, or a reduction in tax rates, will allow them to keep more of their money and send less of it to Washington. President Trump’s third principle of tax reform, ‘tax relief for middle-class families,’ is about lowering tax rates for many hardworking Americans. Tax cuts are an important part of tax reform, as the federal government both spends and taxes too much.

“Then my father got ill and I had to give it up so I could take care of him, and then he passed away,” she said.

Despite the challenges, Young said, she loves her business and is hopeful that tax reform will address her needs as a small business owner.

“Because my employees have been such great employees, and have worked for me this whole time, [this] is the reason we keep doing this even though the profit has shrunk to almost zero,” Young said.

“So if in the tax reform plan there is something for sole proprietorships, that means at the end of the year, there is going to be more money in my company because it will be a lower tax rate for me to have to pay.”

For Carla Young, tax reform is about the people, not the political party.

“So, in cutting taxes for my employees, or for anyone, this is not a political event, this is not a Republican or Democrat, this is an American event,” she said. “It helps everyone.”