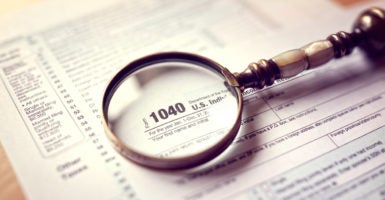 President Donald Trump, Speaker Paul Ryan, and Senate Majority Leader Mitch McConnell told the American people that if they gave Republicans the chance to govern, pro-growth tax reform would be their major legislative priority in 2017.

Now that the voters have given Republicans control of the White House, House, and Senate, there is a real opportunity to achieve comprehensive, pro-growth tax reform.

Today, America’s tax code is outdated, anti-growth, over-complicated, and full of corporate favoritism. We have an antiquated, Frankenstein’s monster of a tax code that doesn’t do any favors to the American taxpayer.

Its problems can be boiled down into the following three categories.

Problem 1: Our Tax Code Is Not Pro-Growth

Our current tax code suppresses business creation, expansion, and reinvestment thanks to high tax rates. The U.S. corporate tax rate is the highest in the industrialized world, which makes it difficult for American businesses to compete with their foreign counterparts.

America’s tax code puts companies at a disadvantage by failing to allow full expensing, or the ability to allow all businesses to deduct the full cost of new capital investments such as a building, machinery, technology, etc., necessary for business creation and growth.

For example, under full expensing, if a small coffee shop wants to buy a new espresso maker they would be looking at a $1,000 investment.

If the government has a tax rate of 35 percent, the shop owner can deduct the expense from their taxable income, reducing their taxes by $350. This saving is a profit that can be passed along in the form of higher wages for the workers or lower prices for the customer.

Without full expensing, the business wouldn’t be able to deduct those full costs, and what they could deduct would be drawn out over a period of time. This would force them bear the full brunt of that new espresso machine.

This may lead them to potentially raise prices or to choose not to innovate or expand because of high costs.

The current tax code also taxes companies on the profits they earn overseas, discouraging foreign investment here in the U.S. to the tune of $2.6 trillion.

It also punishes saving and investment through double or even triple taxation, hurting small businesses and families looking to grow their personal wealth.

Problem 2: Our Tax Code Is Too Complex

Americans spend 9 billion hours complying with the tax code every year, which costs them over $400 billion in lost economic productivity every year. It’s critical that we don’t just cut the tax rate, but that we work to simplify it as well.

More and more tax professionals are specializing in a small segment of the tax code, such as estate tax or small business taxes or companies with large assets that depreciate.

But that level of specialization is only needed after a century of privileged lobbies creating loopholes for special interests like Lady Gaga, Starbucks, and IHOP, and making the system more complicated for American families and workers.

Problem 3: Our Tax Code Is Full of Corporate Favoritism

Well-connected people and businesses routinely game the tax system, precisely because it’s designed that way. This leaves the majority of hard-working taxpayers at a disadvantage.

For example, Nevada agreed to give Elon Musk’s Tesla $1.3 billion in tax incentives in exchange for them building a lithium battery production plant in the state.

Timothy Carney points out that other producers of batteries were experimenting with other types of battery power, but when they found about the special interest subsidy given to lithium batteries, they abandoned their testing of those battery types and focused on producing lithium.

Not only are taxpayers having to foot the bill for nearly a quarter of this for-profit investment, but there are opportunity costs lost in what could have come out of further innovation that was halted because business owners wanted to take advantage of a tax break.

To be clear, we shouldn’t begrudge a classic American company for paying as little as possible in taxes, but we shouldn’t allow them to rig the rules of the game against competitors—especially when that results in higher taxes or less economic opportunity for struggling American families.

So what is the solution?

In the coming months, Congress must work with the White House to come up with comprehensive, pro-growth tax reform that lowers rates for individuals and businesses, simplifies the tax code, ends corporate favoritism, and encourages domestic business creation, expansion, and investment.

Republicans can fulfill their campaign promises to create jobs, increase wages, and restore our stagnant economy back to sustainable long-term growth through tax reform.

It’s time to roll up our sleeves and fix America’s broken tax system.