Obama Gutted Work Requirements for Welfare. Why Trump Is Right to Restore Them. 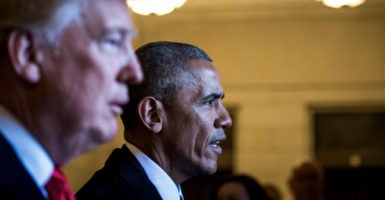 President Donald Trump on Wednesday reversed an Obama administration policy that undermined one of the most successful domestic policy reforms in the last half-century.

In doing so, Trump took strong steps to preserve the original intent of the 1996 welfare reform law: to weaken the cycle of poverty by reducing dependence and promoting self-sufficiency through work and marriage.

This is a sound decision for two key reasons.

First, the decision enforces the 1996 welfare reform law, which deliberately made the core work requirements of the Temporary Assistance for Needy Families program mandatory and nonwaivable by future administrations of the law.

The Obama administration effectively gutted the law’s requirements in July 2012 when it released a policy directive through the Department of Health and Human Services that allowed states to waive the TANF program’s work requirements.

To do this, the Obama administration claimed waiver authority that was illegal and antithetical to the purpose. President Barack Obama’s Department of Health and Human Services produced no historical evidence that Congress intended to grant waiver authority for the TANF work requirements.

Even if it had tried to do so, it would have come up empty.

The summary of the welfare reform law prepared by Congress shortly after its enactment was clear: “Waivers granted after the date of enactment may not override provisions of the TANF law that concern mandatory work requirements.”

The nonpartisan Congressional Research Service was even more clear in 2001 when it stated that “there are no TANF waivers” for work requirements.

In allowing states to waive the TANF work requirements, the Obama administration broke from the established knowledge that Congress had never granted such waiver authority to Health and Human Services.

Trump’s reversal of this bureaucratic maneuver marks a return to the original letter and intention of the 1996 reform law.

Second, Trump’s decision returns the TANF program to the principles that made it successful in the first place.

The TANF work requirements, which required a portion of able-bodied adults on the program to work or prepare for work, formed the foundation of the reform’s success: Welfare rolls dropped by 50 percent, and poverty rates for children, especially black children, reached record lows.

The Obama administration’s directive made wholesale changes to the standards created in the 1996 welfare reform law. The law as written contains “participation rate requirements” that stipulate that 30 to 40 percent of adult able-bodied TANF recipients must engage in “work activities” for 20 to 30 hours per week.

These work activities are broadly defined and include: unsubsidized employment, subsidized employment, on-the-job training, up to 12 months of vocational education, community service work, job search and job readiness training, high school or GED education for recipients under age 20, and high school or GED education for those 20 and over if combined with other listed activities.

Although the Obama administration and its media defenders insisted that it was merely “tweaking” TANF reform, it replaced the core work participation requirements with a significantly weaker “universal engagement” system.

Universal engagement typically requires all adult able-bodied TANF recipients to engage in constructive activities—defined very broadly to include things such as visiting a doctor and looking for daycare—for at least one hour per week.

As The Heritage Foundation has previously written, such a standard could be good policy if combined with existing TANF work standards, but Obama’s Department of Health and Human Services implemented it “in lieu of” the TANF requirements.

However, this “employment exits” measure is inherently misleading. Rather than serving as meaningful indicators of success, employment exits are often a function of welfare caseloads.

According to this measure, the welfare system of old that existed prior to the 1996 welfare reforms would be considered a whopping success: caseloads soared and the number of employment exits nearly doubled.

By contrast, the post-reform TANF program was a failure because caseloads fell and employment exits declined. This is why, when the 1996 reform was drafted, the use of employment exits was deliberately excluded as a success measure. It is inherently misleading.

The president made the right call when he decided to restore a focus on work in this key welfare program. TANF’s principles of work requirements should be replicated in food stamps as the next step in welfare reform in a continuing effort to promote self-sufficiency among able-bodied adults.

Welfare needs a purpose: to provide for the needy, of course, but more than that, to salvage these, our fellow citizens, to make them self-sustaining and, as quickly as possible, independent of welfare.

We should measure welfare’s success by how many people leave welfare, not by how many are added.