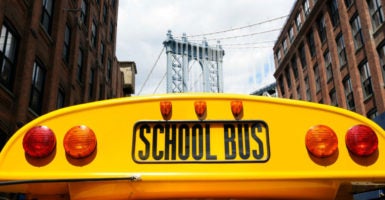 In July, New York City Mayor Bill de Blasio made a deal with state legislators: The mayor would retain control of city schools for two more years in exchange for a commitment to increase the number of charter schools.

But new research suggests that what The New York Times calls his “unwritten concession” on charter schools may work out well for taxpayers and students.

According to a new University of Arkansas report, taxpayers in New York City spend $4,888 less per student on public charter schools than district schools.

This disparity accounts for “in-kind services” that charter schools receive, such as sharing a building with district schools. In such cases, the value of the facility to the charter school is included in the dollar amount comparison.

If in-kind services are left out of the comparison and funding is reviewed on “a strictly cash basis,” according to the researchers, city charter schools receive some $10,000 less per child.

Research demonstrates that funding disparities are common between charter and district schools. Nationally, charter schools are funded at approximately $3,500 less per child than district schools, though figures vary.

In Arizona, a state that is home to five of the 10 highest performing charter high schools in the country, charter schools receive approximately $700 less per student than district schools, according to state analysts. In Maryland, the difference is $7,000.

Still, what matters is how schools use the funding. Eva Moskowitz, founder of the Success Academy Charter Schools, wrote in The Wall Street Journal last week that for charter schools located in Central Harlem, the achievement gap that usually exists between white students and their peers has flipped.

Test scores are a limited indicator of student achievement, and such data should be part of a larger investigation of student and school success. But when charter schools make up 21 of the top 50 New York City schools in reading and math scores, something significant is happening for those children.

Children with special needs account for 16 percent of the city’s charter school enrollment, compared to 18 percent for district schools.

But researchers say that “each of those extra students with disabilities would have to have cost $214,376 more to educate than a general education student for special education obligations in district schools to explain the … funding gap.”

The researchers credit the city’s funding system with having a smaller gap (as a percentage) than the national average. And the city’s Department of Education provides more value to charter schools in the form of in-kind services than in most areas of the country.

For parents, marginal school funding differences matter less than student success. When their child is struggling in a district school, New York City parents should be ready to hold the mayor to his commitment to stop interfering with charter school growth so that children can have more opportunities.

Reports indicate the mayor is already stalling and, as of last week, has 27 requests waiting on his desk from charter schools looking for space.

In a city where two-thirds of fourth-graders read below the basic level on the nation’s report card, promises like this are important to keep.