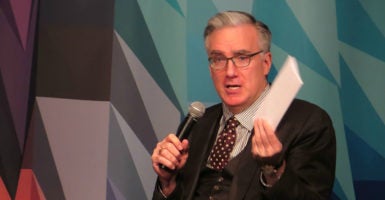 Keith Olbermann, the “new” face of the Democratic resistance on Conde Nast’s digital video platform, is the same old foul-mouthed beast he was on cable TV.

Over the weekend, the former MSNBC frother went berserk over Trump Education Secretary Betsy DeVos’ anodyne call for prayers “for all those in the path of #HurricaneHarvey” and her promise to “assist impacted schools.”

“The hurricane is going to do less damage to schools than you are, Motherf—er,” Olbermann snarled in response (and no, he did not use dashes in his unfiltered, uncensored tweet).

The Twitter Trust and Safety Council, established with much fanfare last year to promote tolerance, discourage bullies, and ensure “people can continue to express themselves freely and safely on Twitter,” was nowhere to be found.

Neither were the rest of the civility police who’ve been lamenting the dangerous climate of hate against all females purportedly fomented by President Donald Trump.

Here’s the thing. There are myriad reasons to criticize DeVos, whatever side of the political spectrum you occupy.

Grassroots education activists on the right, for example, wish the White House had chosen a proven warrior in the fight against Fed Ed instead of a well-heeled, establishment GOP donor who was for the Common Core racket in Michigan before she was against it.

And at the intersection of left and right, informed parents fear DeVos represents the corporate education cronyism of both the Bush and Obama administrations that drove federal testing, technology, and curriculum programs.

But that’s not Olbermann’s beef. DeVos is a Republican. She’s a woman. Therefore, she’s subhuman and deserves his profane attacks.

What’s remarkable is how easily Olbermann cruised into his new role at Conde Nast as the progressive point person against Trump, whom the resistance rage-bot calls “a man not in his right mind.”

Of TV commentator S.E. Cupp, Olbermann sniped: “She’s a perfect demonstration of the necessity of the work Planned Parenthood does.”

Of lawyer and author Ann Coulter, he hurled this transphobic insult: “If this guy wants to live his life as a woman, I’m gonna back his choice up 100 percent.”

And of yours truly, he railed against my “total mindless, morally bankrupt, knee-jerk, fascistic hatred, without which Michelle Malkin would just be a big mashed-up bag of meat with lipstick on it.”

Conde Nast, which has now sponsored two seasons of Olbermann’s internet diatribes, has nothing to say about his lunatic hang-up with conservative women.

And the company cashed in on inaugural protests with a “special edition” magazine (retail price: $13.99) titled “Rise Up! The Women’s Marches Around the World.” One-sided narratives on the war on women sell.

So, who will be Olbermann’s next GOP target of sexist slander? What innocent comment from a female Trump supporter or Cabinet member will prompt his next f-bomb-laden tirade?

I know this for sure: Whoever this toddler-brained bully fumes at ad feminam and ad nauseam, smug elites in the New York publishing world will shrug their Burberry scarf-wrapped shoulders and look the other way.

Pussy-hat hypocrisy means never having to say you’re sorry for lifting up a worse ogre than the one you think you’re bringing down.