I’m a Conservative Professor. Why My Students Should Never Be Shut Down for Speaking Freely. 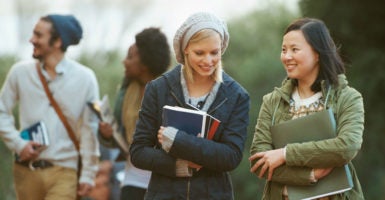 Freedom of speech is a necessary precondition for rational and honest inquiry, something the university wishes to advance. (Photo: iStock Photos)

Right now, all around the country, millions of students are returning to institutions of higher education for the fall semester, while others will be attending for the first time.

In recent months, several universities have seen setbacks for freedom of speech and debate, with speakers being disinvited by administrators fearful of controversy, and others being blocked from speaking by students who disagreed with their views.

If we want to respond to these developments intelligently, we first have to understand why freedom of speech is necessary for a university. What function does it serve?

The answer is tied up in understanding the purpose of the university itself.

The modern, pluralistic university—that is, the university that is not sectarian, and does not claim to be in the service of a particular religious or moral outlook—understands itself as seeking to transmit to its students a body of knowledge, as well as the ability to think critically about that body of knowledge and add to it.

This enterprise cannot be carried on successfully without freedom of speech—without the ability of faculty and students to debate openly the merits and demerits, strengths and weaknesses of various points of view, even ones that are thought to be extreme or outside the mainstream of dominant opinion.

Nevertheless, knowing that this body of knowledge has been built up by imperfect human beings, the university must also admit that it is in some ways imperfect, capable of being questioned and improved.

The rational, critical thinking necessary to that process of questioning requires an environment in which different opinions can be stated, examined, and criticized.

Most people agree with this in general, but some will insist on exceptions to freedom of speech, arguing, for instance, that universities have an obligation to correct the thinking of some students or to protect the feelings of other students.

I would contend, however, that these other considerations, while they may sometimes have merit in themselves, do not in fact justify departures from the general policy of freedom of speech in universities.

For example, some teachers might think that it is part of their job not only to transmit knowledge and foster rational thinking, but also to cure their students of what they, the teachers, regard as retrograde or unjust opinions.

Some might doubt that this is in fact the job of a university professor. But if it is, it still requires freedom of speech.

Generally, people cannot be shamed out of their opinions, and certainly not their deeply held opinions. If the university itself, or particular teachers, try to silence certain opinions by using authority to label them as disreputable, the students who hold those opinions will just keep them to themselves, while continuing to act on them and likely express them anonymously on the internet or privately to their close friends.

If the aim is to remedy error, nothing is gained by preventing the freedom of speech that permits errors to be stated freely, examined, criticized, understood, and corrected.

In a spirit of understandable compassion, some people have thought that the university should protect some of its members from ideas that they may find hurtful. While compassion is praiseworthy, its aims are not in fact served by jettisoning freedom of speech on college campuses.

As university leaders often remind us, we live in a large, diverse, and increasingly interconnected world. No university can protect students—who will spend considerable time outside the university, and who all have access to the internet—from ideas they find troubling.

The only way to protect students from bad ideas is to give them the intellectual tools to examine them critically, which, again, requires the freedom to express those ideas in the first place.