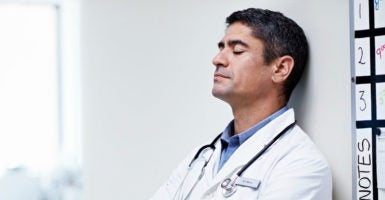 SB 219 would threaten doctors and assisted living staffs with criminal penalties for failing to use a person's desired gender pronoun. (Photo: iStock Photos)

The First Amendment stands as a testament to one of the Founding Fathers’ core convictions: that man has an inalienable right to live out his deeply held religious beliefs, and that government’s proper role is to protect this and other inalienable rights.

In the words of James Madison, “Conscience is the most sacred of all property.” No matter how fiercely a government safeguards other property rights, it exceeds all proper bounds the moment it looks to “invade a man’s conscience, which is more sacred than his castle.”

Unfortunately, it seems several California legislators never got that memo.

This bill, which has already passed the California Senate, would impose criminal sanctions on individual staff members of nursing homes and similar facilities who “willfully and repeatedly fail to use a resident’s preferred name or pronoun,” or prohibit a resident from using a bathroom consistent with his or her gender identity.

It would also criminalize refusing to provide medical or nonmedical care specific to transgender individuals where doing so “unduly demeans the resident’s dignity or causes avoidable discomfort.”

While this “bill of rights” would be inserted into a section of California’s Health and Safety Code that arguably does not “criminalize” these actions, the bill itself amends another section—the Residential Care Facilities for the Elderly Act—to include prohibitions against violating the “bill of rights.”

Violation of this law is punishable by up to one year of incarceration and a $1,000 fine, regardless of criminal or civil penalties imposed by other code sections for the same violation.

The latest version of the bill, dated Aug. 21, provides no religious exemptions for facilities or individual staff members with sincerely held religious beliefs about human nature that run contrary to the bill’s ideological assumptions.

Nor does it exempt physicians associated with these facilities from being compelled to provide services to transgendered individuals, even if the provision of such services would violate their sincerely held religious beliefs or their clinical judgment as medical professionals.

Why This Is a Problem

This latest attempt to infringe upon First Amendment rights is particularly worrisome given the large number of religiously affiliated nursing homes regulated under California law.

Many religious denominations adhere to doctrinal statements directly opposed to the ideological assumptions of SB 219. For example, the Roman Catholic Church holds to a very specific position on gender identity, as was reflected in a January statement from the National Catholic Bioethics Center.

For most religious communities, the refusal to affirm a person’s gender identity stems not from hatred of LGBT individuals, but rather from a deeply held conviction of who God is and what he has revealed about human nature.

These beliefs, and the right to act in accordance with them, lie at the very core of First Amendment protection.

Of particular concern is the fact that SB 219 touches upon not just one but several core First Amendment rights of nursing home facilities and their staff.

First, the bill both restricts and compels certain types of speech for staff members. This is not simply a matter of limiting what a person may say, but compelling him or her under threat of government sanction—a criminal offense, no less—to actively speak in a way that violates his or her conscience before God.

Fortunately, the Supreme Court has in recent decades increasingly strengthened First Amendment protections by routinely striking down content-based restrictions on speech, and regulations that compel a person to speak contrary to their religious convictions.

But in addition to compelling speech, SB 219 could both restrict and compel nonspeech medical practices that violate the conscience of staff members and affiliated medical practitioners. Contrary to the assumptions of many LGBT activists, there is no firm medical consensus on the causes of proper treatments for gender dysphoria.

Stripping the Rights of Doctors

SB 219 eliminates any room for physicians employed by nursing homes to use reasonable medical discretion, solely for the sake of not hurting a resident’s feelings. This degrades not only the medical practice itself, but the moral agency and professional autonomy of the practitioner.

Unlike prohibitions on certain types of treatment, SB 219 would actively force physicians to provide services to transgender individuals that many physicians strongly believe violate their Hippocratic Oath to “do no harm.”

The Supreme Court has repeatedly acknowledged the right of doctors to refuse the provision of services that violate the doctor’s conscience and perceived ethical standards. It explicitly stated in Roe v. Wade—which infamously held a woman has a constitutional right to an abortion—that “no party to the [abortion] should be required to violate personally held moral principles.”

It affirmed this reasoning in Doe v. Bolton, declaring that “a physician or any other employee has the right to refrain, for moral or religious reasons, from participating in the abortion procedure.”

Surely, this protection against the forced violation of conscience is not limited to abortion, but covers similar services to which a physician or medical service provider might object for moral or religious reasons.

This would seem to preclude imposing criminal sanctions on California physicians who refuse to provide transgender-specific treatment regimens that violate their religious, moral, or ethical creed, even though this refusal could cause the transgender individual to experience personal “discomfort” in violation of SB 219.

This Is About Conscience, Not ‘Oppression’

It is foolish to suggest—as too many are wont to do—that those opposed to SB 219 advocate the oppression of LGBT individuals, or that they do not affirm the dignity and humanity of such individuals.

They are simply affirming their own right to a free conscience, and to act in accordance with their sincerely held religious beliefs.

It is these rights, enumerated in the Constitution, that the lawmakers in California must honor.

This is not to flippantly deny the deep-seated and intensely personal nature of gender identity, or the real hurt often experienced by transgender people. It is, rather, to defend a most precious principle of American liberty—that which “protects the rights of conscience against the enterprises of civil authority.”

There is no similar right to be free from offense.

If the inalienable right to conscience means anything, it must mean that one can’t be compelled to act against one’s own conscience under threat of criminal sanctions.

The dismissal of conscience rights in professional fields does not promote human dignity, but rather denigrates it by dismantling the very autonomy and moral agency of the one whose conscience is suppressed.

While it is laudable that Wiener and those sponsoring SB 219 wish to protect LGBT individuals from vitriol and hateful actions, they should not do so by forcing others to act and speak in ways that violate their own religious convictions.