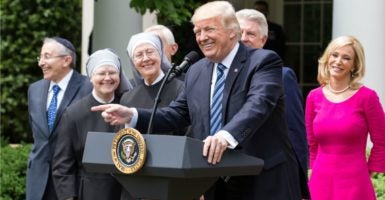 President Trump invited the Little Sisters of the Poor on stage at the Rose Garden during a May 4 ceremony before signing executive orders to promote religious freedom. (Photo: Cheriss May/Sipa USA/Newscom)

Advocates for religious liberty are dismayed that little has changed with respect to the Obamacare contraceptive mandate, even after President Donald Trump signed a religious freedom executive order earlier this year.

“I believe the president is committed to religious freedom and that Attorney General [Jeff] Sessions is a good man. But their goals simply haven’t played out,” Douglas Wilson, CEO of the Catholic Benefits Association, told The Daily Signal.

The Supreme Court punted on the Little Sisters of the Poor’s religious liberty case against the Obama Department of Health and Human Services, though broadly gave the Catholic charity a victory in vacating lower court rulings and asking that parties submit proposals to settle the situation.

After the passage of the Affordable Care Act, the Obama administration imposed a mandate that employers pay for insurance plans that cover contraception, sterilization, and abortion-inducing drugs.

The Catholic Benefits Association, which was begun in 2013 and represents 1,000 Catholic employers, won a preliminary injunction lawsuit against the Obama administration rule in the 10th U.S. Circuit Court of Appeals in Denver.

The Justice Department appealed that ruling and has refused to drop the appeal. As recently as July 31, it filed a motion to keep the appeal moving forward. The motion referred to unspecified regulatory resolution that the administration was trying to reach.

However, the Department of Health and Human Services had already presented a draft regulation to the White House Office of Management and Budget in May that concluded the Obama-era contraception mandate was illegal and not necessary to protect women’s health, Wilson noted in a letter to Trump. The draft regulation has never been implemented.

“It’s an Obamacare rule, but this particular regulation came out of the HHS and could be overturned by the administration,” Wilson said.

In an Aug. 16 letter to Trump, Wilson wrote:

Had Congress repealed and replaced Obamacare, I would not be writing you today. However, I write to draw your attention to a particularly unpopular and onerous part of Obamacare that is directly within your control to fix, and that you have previously pledged to fix: the imposition of Obamacare’s contraception, sterilization and abortifacient (abortion-causing drugs) mandate upon the faith community. …

HHS, OMB, and DOJ could end this six-year nightmare almost immediately by:

1. Stopping the defense of Obamacare Mandates in court.

2. Agreeing to a permanent injunction protecting plaintiffs in all such cases.

“The department is committed to robust enforcement of the Religious Freedom Restoration Act, but we will not comment on ongoing settlement discussions,” Justice Department spokesman Ian Prior told The Daily Signal.

In signing an executive order in May, Trump invited the Little Sisters of the Poor to the podium during a Rose Garden ceremony, and said, “Congratulations, you sort of just won a lawsuit.”

There’s an apparent disconnect between what Trump and Sessions are talking about and the actions of the Justice Department, said Montse Alvarado, executive director of the Becket Fund, a legal group that litigates for religious liberty that is representing the Little Sisters of the Poor.

“The Justice Department is not doing what the president promised the Little Sisters of the Poor in the Rose Garden,” Alvarado told The Daily Signal. “DOJ negotiations have been going on for three months. Seven months into this administration, we expected something different [from the Trump administration] than what we got from the Obama administration.”

Asked about the issue last week, White House press secretary Sarah Huckabee Sanders said she was not aware of the complaints and referred a reporter to the Department of Health and Human Services.

“To ensure fairness, the Administrative Procedure Act limits the ability of government officials from disclosing any non-public information regarding rulemaking and regulations,” HHS spokesman Matt Lloyd told The Daily Signal in an email.

The Obama administration initially carved out a very narrow exemption for religious institutions. But other religious employers, among them hospitals, schools, and charities, as well as businesses, were still responsible for complying with the Obamacare mandate. The Supreme Court’s ruling in the Hobby Lobby case provided protection to privately held businesses, but many private employers were still subject to the mandate.

During the Rose Garden event in May, Trump said the “long ordeal” of religious employers was coming to an end, and it hasn’t, said Melanie Israel, research associate for the DeVos Center for Religion and Civil Society at The Heritage Foundation.

“The mandate is a burden on employers, individuals, and religious organizations who, because of their beliefs concerning the protection of unborn human life, are faced with the decision to violate sincerely held religious or moral beliefs, pay steep fines, or forgo offering or obtaining health insurance entirely,” Israel told The Daily Signal in an email.

“It is time for the Trump administration to make good on the promise made four months ago and ensure that these groups’ ‘long ordeal’ with the contraception mandate comes to an end,” she added.