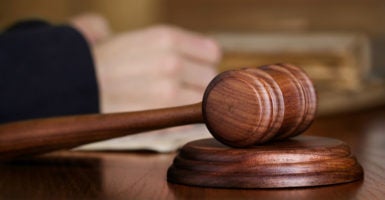 Judge Nelva Gonzales Ramos struck down Texas' voter ID law in its entirety, ignoring a directive she had received from the 5th U.S. Circuit Court of Appeals. (Photo: iStock Photos)

Some judges are determined to strike down election integrity laws, no matter what.

How else can you explain last week’s irrational decision handed down by federal District Court Judge Nelva Gonzales Ramos?

A President Barack Obama appointee, Ramos is at least consistent. This was the fifth time she has rejected a voter ID law for Texas.

Her 2014 rebuff of the original version of the Texas law made it clear that she believes all voter ID laws are based solely on the desire to discriminate, not improve the integrity of the election process.

Now you know why the plaintiffs went shopping to her federal court to bring the statewide challenge.

In 2014, Ramos ruled that the law discriminated against minority voters—ignoring clear evidence that this is not the case. Minority turnout had actually increased in the 2013 state election, the first election held with the new ID law in place.

What makes Ramos’ latest ruling so odd is that the amended law not only followed all guidelines set out by the 5th Circuit Court of Appeals, it also contained provisions that Ramos herself had found acceptable as an interim remedy for the November 2016 election.

Here’s why Ramos’ decision is likely to be reversed.

The original Texas law required voters to present a government-issued photo ID, and the state to provide a free ID to anyone who did not already have one. Ramos ruled this provision was discriminatory, and a split 5th U.S. Circuit Court of Appeals last year upheld her views on the discriminatory effect claim.

But the 5th Circuit remanded the case to Ramos, saying there wasn’t sufficient evidence to support her conclusion that the legislature had a discriminatory purpose in passing the law.

By throwing out the entire law, Ramos has blatantly ignored the 5th Circuit’s directive.

The 5th Circuit also found acceptable the section of prior Texas law that allowed “forms of identification like utility bills, bank statements, or paychecks.”

In 2016, when the litigation was remanded to Ramos, she approved an interim remedy (agreed to by the Obama Justice Department) that would allow voters who showed up at the polling place without an ID to still vote in the general election if they:

In other words, the remedial law had a safety valve where individuals without an ID were still able to vote.

This list of documents is identical in part to a federal requirement (Section 303(b) of the Help America Vote Act) that has been in place since 2002.

That provision requires that any voter who registers to vote by mail must, the first time they vote, show state election officials an ID such as a “current and valid photo identification” or “a copy of a current utility bill, bank statement, government check, paycheck, or other government document that shows the name and address of the voter.”

The voter ID law amendment adopted by the Texas Legislature this year implemented the language from the Ramos-approved interim remedy and the 2002 Help America Vote Act almost word-for-word.

Now claiming that the law as amended is discriminatory, Ramos dismissed her prior approval of these same requirements as not a “binding determination.”

Ramos’ 27-page opinion is a strained attempt to strike down the law by any means necessary. At one point, she faults Texas for making it a crime to lie on the “reasonable impediment” declaration, claiming that it amounts to “voter intimidation.”

Really? Federal law (52 U.S.C. §10307) makes it a felony to provide false information when registering to vote. Her irrational claim calls into question every state and federal law that requires voters to attest to the truth of the information they provide.

Ramos even found that requiring voters to provide the reason for their “reasonable impediment”—such as lack of transportation, work schedule, disability or illness—is discriminatory. According to Ramos, there “is no legitimate reason” for the state to require such an explanation.

Under that reasoning, every state that requires voters to explain why they are voting absentee is discriminating.

Ramos has evidently drunk the Kool-Aid served by fringe activists who see racial motivations behind a spectrum of American institutions and commonsense election administration rules.

Texas has already indicated it intends to appeal. It should fight all the way up to the Supreme Court, if necessary, to overturn Ramos’ unfair, unjustified, and radical decision.