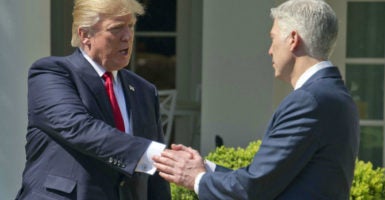 “Unfortunately, we've also seen the Democrats ratcheting up the level of gridlock and obstruction because they know that they need liberal judges in the courts to advance their agenda,” says Carrie Severino of the Judicial Crisis Network. (Photo: Ron Sachs/SIPA/Newscom)

Conservatives are launching a campaign to put pressure on Democrats and counter what they view as the obstruction of President Donald Trump’s judicial nominees.

“This is an issue that has energized the American people in a unique way last November,” Carrie Severino, chief counsel and policy director of the Judicial Crisis Network, told The Daily Signal in a phone interview. “The issue of making sure that we have principled judges on the courts was a key driving force behind the people who elected Donald Trump.

“He has a mandate on this issue to continue to put great judges on our federal courts, and we have seen an excellent set of nominees.”

The Judicial Crisis Network, an organization dedicated to defending the Constitution and what it calls the Founding Fathers’ vision of limited government, announced last Friday a $500,000 digital ad campaign to support the effort to confirm the nominees.

Joining in the campaign are other conservative groups such as Tea Party Patriots, Concerned Veterans for America, Susan B. Anthony List, and Concerned Women for America. The groups will engage their grassroots base by driving attendance at town halls hosted by Democratic members of Congress and launching email campaigns, phone banks, and email alerts.

According to the Judicial Crisis Network, there were 105 judicial vacancies when Trump was inaugurated in January. Since January, the number has risen to 140 vacancies.

The delay in confirmation is due to partisan politics, Severino said.

“Unfortunately, we’ve also seen the Democrats ratcheting up the level of gridlock and obstruction because they know that they need liberal judges in the courts to advance their agenda,” Severino said, adding:

There’s many times when they aren’t able to accomplish their goals in the court of public opinion and the Democratic process that is supposed to be done to pass laws and so then they just turn to the courts to try to do it for them. That is not how our system is designed.

According to Severino, “a really key example” of Democrat obstructionism can be seen in the case of David Nye, who was confirmed July 12 as a judge for the United States District Court for the District of Idaho.

Nye, who was nominated by President Barack Obama, “had not just broad support among Democrats, [but had] 100 percent support of every single U.S. senator,” noted Severino. Yet even in his case, “the Democrats forced and spent the maximum amount of time, including 30 hours on the Senate floor to have his confirmation go through, only to vote [for him] 100 percent.”

Severino says a way to fix the gridlock is to enact a proposal offered by Sen. James Lankford, R-Okla.

The Oklahoma senator explained his proposal to combat what he sees as Democrat obstructionism in an article published earlier this month in The Wall Street Journal.

“We should reduce floor debate time for executive nominees from 30 hours to eight or less,” Lankford wrote. “The Senate could debate and vote on five or more nominees a week, instead of just one or two.”

Another way the Judicial Crisis Network seeks to end the confirmation delay is to reform the “blue slip” process.

Under Senate tradition, the committee doesn’t hold hearings for a judicial nominee until his or her home state senators submit “blue slips” showing their consent to advancing the nomination, The Daily Signal previously reported.

Blue slips aren't even causing the biggest slowdown- all Trump judges have been forced to burn 30 hrs debate just to waste time. https://t.co/Fje3OqF34v

On May 8, Trump announced his choice of Michigan Supreme Court Justice Joan Larsen to the 6th U.S. Circuit Court of Appeals.

The Detroit News reported July 4 that Larsen’s confirmation had not proceeded forward because two senators, Democrats Debbie Stabenow and Gary Peters, had not signaled their approval by submitting the blue slips.

On Aug. 4, MLive reported that Stabenow and Peters “have given the go-ahead for the Senate Judiciary Committee to begin proceedings” for Larsen’s confirmation.

“No administration in recent memory has been slower in sending nominations to the Senate,” Schumer said on July 10.

“We can’t go forward until that happens,” Schumer said. “That’s almost unprecedented in its degree. Time and time again they’ve stalled on providing committees the information needed. … It’s typical of the Trump administration: Do something wrong and blame someone else for your problem.”

Senate procedure is important, Severino said, but should not lead to obstructionism.

“Senate procedures and rules are designed to increase deliberation, and to make the process move smoothly, but forcing the Senate to waste time on people who are utterly uncontroversial is not what it is designed to do,” Severino said.