Russian Actions in Belarus Are Cause for Concern 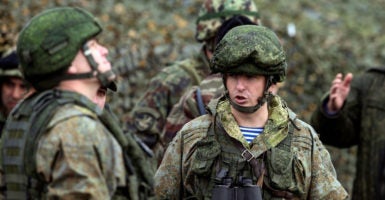 Russian troops are scheduled to participate in a major military exercise in Belarus this September. (Photo: Marko Djurica/Reuters/Newscom)

Russian actions in Belarus, an Eastern European country slightly smaller than the state of Kansas, are causing concern among neighboring countries.

Russia is planning massive joint military exercises next month in both Belarus and Russia, and is even constructing a nuclear reactor in the country, close to the Belarus-Lithuania border.

A former Soviet nation, Belarus has been ruled by autocratic President Alexander Lukashenko since 1994. Lukashenko, who has been called the “last dictator of Europe,” maintains tightfisted rule over the country.

Freedom House classifies Belarus as “not free,” noting that it is “an authoritarian state in which elections are carefully managed and civil liberties are minimal.”

In June, President Donald Trump extended U.S. sanctions against Lukashenko and other members of the Belarusian ruling elite due to their actions and policies to “undermine democratic processes or institutions of Belarus, to commit human rights abuses related to political repression, and to engage in public corruption.”

Belarus is an ally of Russia, although the relationship is not black and white and is at times contentious.

Belarus has long flirted with the West but always remained closer to Moscow. At times, Lukashenko has sought to create breathing room in his relationship with the large neighbor to the east—for instance, denying Russian requests to build an airbase in Belarus.

Yet, despite some differences with the Kremlin, Belarus remains deeply entwined with Russia. Today, Belarus is the only former member of the USSR where the number of people who cite Russian as their first language has grown since the breakup of the USSR.

Military cooperation is a key component of the relationship. In September, the two nations will conduct Zapad 2017, a massive exercise in Russia’s western military district, Russia’s Kaliningrad enclave, and Belarus.

These massive exercises are a serious concern to NATO, especially the neighboring member states of Estonia, Latvia, Lithuania, and Poland. The name of the Zapad exercises means “West,” and Russia has utilized exercises before to mask real military maneuvers.

Air Force Brigadier Gen. John Healy recently stated that Russia is not being transparent with its Zapad exercises and has not invited Western observers.

In April, Estonian Defense Minister Margus Tsahkna raised concerns that significant numbers of Russian troops might stay behind in Belarus following the exercises, stating, “For Russian troops going to Belarus, it is a one-way ticket.”

However, the Zapad exercises are not the only reason to be concerned about Russian actions in Belarus. The Baltic states also have raised concerns regarding Russia’s construction of a nuclear reactor in Astravets, Belarus, a short 12 miles from Lithuania’s border and only 24 miles from the Lithuanian capital of Vilnius.

In fact, the nuclear plant will cool its reactors by drawing water from the Neris River, the same river that provides Lithuanian cities like Kaunas and Vilnius drinking water.

The Lithuanian government states that Belarus has not carried out proper environmental impact studies for the reactor and that the project should be stopped for “non-compliance of the project to international standards of environmental protection and nuclear safety,” in addition to other reasons.

A number of mishaps and accidents in the building of the reactor are of serious concern, including a report that a 330-ton reactor shell was dropped some 6-13 feet during installation. In June, Lithuanian Prime Minister Saulius Skvernelis called the nuclear plant “one of the biggest threats to our country.”

But the threat from the Russian-built reactor is not merely environmental. Perhaps more importantly, the nuclear reactor being built at Astravets is a political project that will further entrench Russia’s position in Belarus, making Belarus even more reliant on Russian energy once the project is completed.

As noted by Giedrius Cesnakas and Justinas Juozaitis in a recent paper, Russia will surely seek to use the offer of cheap energy from the nuclear reactor to attempt to create political divisions in the region over its purchase.

The authors note: “Only Lithuania has adopted a law forbidding the purchase of electricity from Ostrovets NPP and denying Belarus the use of its energy infrastructure, while Poland has announced it will not purchase electricity produced in the Ostrovets NPP.”

Russia will also seek to stymie efforts by the Baltics, Finland, and Poland to ease their own dependence on Russian energy, such as the decision of the Baltic states in May to connect their power grids (currently integrated with Belarus and Russia) with Poland’s power grid.

With September’s commencement of Zapad 2017, expect Russia’s actions in Belarus to attract more attention, as well as understandable concern of our allies in the region.