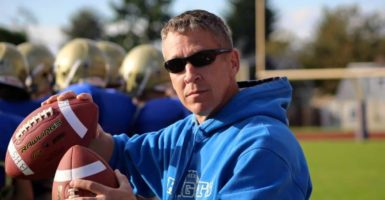 Appeals court judges rule that Joe Kennedy “took advantage” of his authority as a teacher and coach by praying in public after football games. (Photo: Larry Steagall/Kitsap Sun/First Liberty Institute)

The Supreme Court could be the next stop for a high school football coach after a federal appeals court said a Washington state school district acted properly in firing him for praying in public after games.

A three-judge panel of the 9th U.S. Circuit Court of Appeals ruled Wednesday that Joe Kennedy “took advantage” of his authority as a teacher and assistant coach at Bremerton High School by praying after games, when he sometimes was joined by players and parents from opposing teams as well as his own.

In doing so, the judges decided, Kennedy acted to “press his particular views upon impressionable and captive minds before him,” adding:

By kneeling and praying on the 50-yard line immediately after games while in view of students and parents, Kennedy was sending a message about what he values as a coach, what the [school] district considers appropriate behavior, and what students should believe, or how they ought to behave.

Washington’s Bremerton School District has no legal obligation to return Kennedy to the job he held from 2008 to 2015, the Associated Press reported of the court’s two opinions totaling more than 60 pages.

“According to the 9th Circuit, it is unconstitutional for a coach to make a sign of the cross or bow his head in prayer when a player gets hurt,” said Mike Berry, deputy general counsel to First Liberty Institute, a public interest law firm that specializes in religious liberty cases and represents Kennedy, a former Marine.

“We are deeply disappointed by the decision and will consider all options available to Coach Kennedy as we continue to review the opinion,” Berry said in a prepared statement.

The Daily Signal has followed the Kennedy case since October 2015 and produced video reports on it last year.

“I just want the ability to go back out there and help these young men, and also have my constitutional rights that I fought for in the Marine Corps for 20 years,” Kennedy said in an interview with The Daily Signal’s Kelsey Harkness after filing suit last August.

“Teachers and coaches don’t get to pressure students to pray,” Richard Katskee, legal director at the Washington, D.C.-based Americans United for Separation of Church and State, told The Seattle Times.

The group had filed an amicus brief supporting the school district’s decision to suspend Kennedy and not renew his contract in 2015.

Both the school district and Kennedy cited the First Amendment in making their cases June 12 to the 9th Circuit. The coach unsuccessfully had asked U.S. District Judge Ronald Leighton to force the district to rehire him as the case proceeded.

“Banning all coaches from praying individually in public just because they can be seen is wrong,” First Liberty President and CEO Kelly Shackelford said in a prepared statement following Wednesday’s ruling. “This is not the America contemplated by our Constitution.”

Before appealing to the nation’s highest court, Kennedy’s lawyers could ask for a rehearing or arguments before an expanded number of 9th Circuit judges.