Disagreement Isn’t Hate, Despite What the Left Says 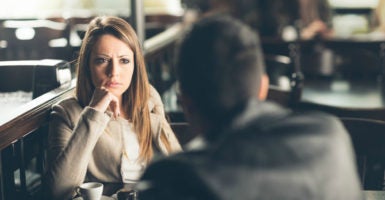 The defense of truth is motivated by love, not hate. (Photo: iStock Photos)

Last week, I made a short video about how the media and the Southern Poverty Law Center were getting “hate” wrong, slandering good groups such as the Family Research Council and Alliance Defending Freedom by calling them hate groups.

Liberal activists disagree with conservatives on marriage & gender identity.But it’s wrong to think every disagreement is the result of hate pic.twitter.com/IKxeAqjrbp

Liberal activist groups do this because they disagree with conservatives on marriage and gender identity. But it’s wrong to think every disagreement is the result of hate.

Anti-gay bigotry exists. It’s wrong. And we should condemn it.

But support for marriage as the union of husband and wife isn’t anti-gay. Believing the truth about marriage—that it unites a man and woman as husband and wife in an act that makes them one flesh—isn’t “anti” anything.

Believing that men and women aren’t interchangeable, and that mothers and fathers aren’t replaceable, that children deserve both a mom and a dad—that’s not hate. It’s truth. And even if you disagree, you should acknowledge that it’s motivated by love, not hate.

Anti-trans bigotry is real—and it’s wrong. And we shouldn’t tolerate it.

But biology isn’t bigotry. The best biology, psychology, and philosophy conclude that sex is a biological reality and that gender is the social expression of that reality. And it’s entirely reasonable to have concerns about privacy and safety when males who identify as women can go into the ladies’ and girls’ bathroom and locker room.

These are difficult questions. We need to be able to disagree about them without smearing our opponents, on either side.