Trump Lays Out a Winning Strategy for Afghanistan 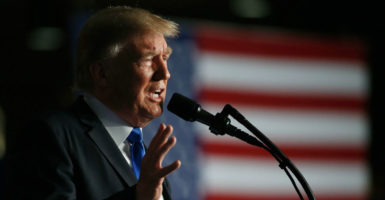 In a prime-time speech, President Donald Trump announced a strategy for victory in Afghanistan based on the fulfillment of concrete objectives rather than a set timetable. (Photo: Joshua Roberts/Reuters /Newscom)

After months of speculation and delay, President Donald Trump has sided with the expert advice of his military and national security team on the way forward to the U.S. mission in Afghanistan.

In what was by far his best and most statesmanlike speech since taking office, Trump outlined a new approach Monday night to the ongoing war in Afghanistan: a laser-like focus on counterterrorism, jettisoning the quixotic nation-building rhetoric of the past, helping the Afghans defeat the Taliban insurgency (not doing it for them), lifting onerous restrictions placed by the Obama administration on the way the military conducts warfighting, and pressuring Pakistan and its support for certain elements of the Taliban.

Crucially, Trump made clear that under his watch, progress in Afghanistan will be measured by conditions on the ground and not by a politically driven and artificial timeline—a major departure from President Barack Obama.

What Trump outlined in his speech tonight was a reasonable, realistic, and responsible strategy to ensure America achieves “an honorable and enduring outcome worthy of the tremendous sacrifices that have been made” in Afghanistan.

There were three important takeaways from Trump’s speech.

First is his commitment to send more trainers to Afghanistan and stay committed to the mission there, even though, in his own words, it went against his initial instincts. This shows that he trusts his commanders and national security team.

The commitment to send more U.S. trainers is particularly important. The war being fought in Afghanistan today is not the same war from 2001 or even 2009, when the U.S. was leading combat operations.

Ultimately, it is the Afghans’ country and their war. We are not there to fight for them, but to help them fight and win.

The Afghan security forces are that country’s ticket to long-term security and stability. If we continue to mentor, train, and fund the Afghan military, the Afghans will be able to take on the insurgency themselves.

Not only will this help the Afghans prevent their country from becoming a hub for transnational terrorism, this will eventually establish the security conditions inside which a genuine political process can take place.

This is why Trump’s decision to increase the number of U.S. advisers and mentors is so important.

Second, the president was right to state very clearly that the U.S. is no longer in the business of nation building, and that we do not seek to bring our way of life to Afghanistan.

We are there for national security alone—ours and the Afghans’.

For many years, America’s mission in Afghanistan was often defined by lofty rhetoric of “nation building” and “bringing democracy.” Consequently, the inability to produce what public opinion considers tangible and achievable results 16 years on has disappointed many.

Success in Afghanistan is not when 100 percent of its districts are under the complete control of the Afghan government, or when there are no more suicide bombings. Nor is success in Afghanistan achieved when every road is paved, every girl goes to school, or everyone gets the right to vote.

These things are very important in themselves, and we should hope for them, but they are neither the reasons why we went to Afghanistan nor the reasons we should remain there. It is welcome that Trump gets this.

Finally, another important aspect of Trump’s speech—and arguably the most important in the long run—was the emphasis on a regional strategy.

The main focus here, of course, is Pakistan and its nefarious role in harboring and providing succor to elements of the Taliban. As Trump stated very clearly: “We can no longer be silent about Pakistan’s safe havens for terrorist organizations, the Taliban, and other groups.”

This will likely be the hardest aspect of his strategy to achieve. Both of Trump’s immediate predecessors also made overtures to the “regional” approach to Afghanistan, but neither delivered.

Pakistan cannot have it both ways, and the U.S. has a great deal of leverage to use to help Islamabad change its ways. If Trump is seriousness about this and has the political will to truly pressure Pakistan, then his regional approach will succeed where it has failed for others.

So can Trump’s strategy bring success in America’s longest war?

Success will be achieved when Afghanistan is stable enough to manage its own internal and external security to a degree that stops interference from outside powers, allowing the country to resist the establishment of terror bases that were there before. Nothing more and nothing less.

In that context, the current war in Afghanistan is winnable.

We need to start measuring success by achievements on the ground and not by unrealistic expectations based in nation building. Trump’s speech is a great place to start.

We also need to realize that patience is required. Success in Afghanistan will be measured in years and decades, not 24-hour news cycles and 140-character-long tweets.

The strategy Trump outlined is a prudent way to assure that we can meet our strategic security objectives. It will send all the right messages to our allies and foes alike, be they in Europe, Afghanistan, or the rest of South Asia.

Now is not the time to turn our backs.