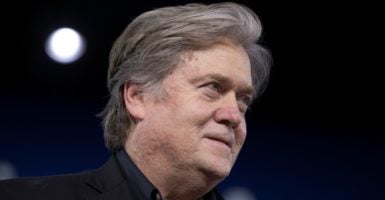 The exit of White House chief strategist Steve Bannon doesn’t bode well for conservatives or those who just wanted to see President Donald Trump stick to the economic and foreign policy message that he ran on, some on the right fear.

“There is no question that Steve Bannon was one of the only people who could keep Trump true to Trumpism,” Mark Krikorian, executive director of the Center for Immigration Studies, told The Daily Signal. “Without Bannon, you have mostly bankers, generals, and liberal Democrats in the White House. It could be a Hillary-lite administration.”

Trump was in line with some of the policies promoted by the Center for Immigration Studies, a think tank that backs enforcement of immigration laws. However, it’s not just immigration where Krikorian fears President Trump could waiver from the policies of candidate Trump.

“Bannon pushed hard in the other directions to keep the president from drifting toward the establishment on foreign policy and trade or confronting China,” Krikorian said.

“We will miss Steve Bannon in the White House because he helped President Trump keep many of the promises he made on the campaign trail, like replacing the late Justice Antonin Scalia with a trusted conservative in Justice Neil Gorsuch,” Martin said in a statement. “President Trump is his own man and we are confident he will keep working to deliver on those promises and we will continue to advocate for the Trump agenda that propelled him to victory.”

After initial reports Friday, White House press secretary Sarah Huckabee Sanders confirmed that White House chief of staff John Kelly, a retired Marine general, and Bannon came to a mutual agreement that Bannon should leave his post. Bannon has returned to Breitbart News, a media company he ran before joining the campaign.

Steve Bannon will be a tough and smart new voice at @BreitbartNews…maybe even better than ever before. Fake News needs the competition!

I want to thank Steve Bannon for his service. He came to the campaign during my run against Crooked Hillary Clinton – it was great! Thanks S

Bannon offered his resignation on Aug. 7, the Associated Press reported. The resignation was set to go into effect on Aug. 14, but was held back because of the Charlottesville, Virginia, riots.

Krikorian noted that Sebastian Gorka, deputy assistant to the president, and senior adviser Steve Miller have been targeted by the establishment.

“Trump is Trump; no matter what the staffing looks like, in terms of ideological profile or otherwise, he’s still the same guy with the same impulses, instincts, and outlook,” Mair told The Daily Signal in an email.

“Trump has always—over the decades he’s been weighing in on public policy and related debates—been anti-free trade, for greater government involvement in health care,” Mair said.

In a series of tweets from one of Trump’s most early and vocal supporters, conservative commentator Ann Coulter seemed to have low expectation that Trump would stick to his promises. In three examples, Coulter tweeted:

STEVE BANNON OUT! Media is the most powerful branch of government.

For clarity, should be: Trump “better be pedal-to-the-metal on tax hikes for Wall St, the Wall & killing NAFTA.” https://t.co/1vp3j22OxY