2 Former Wasserman Schultz IT Aides Indicted for Conspiracy Against US 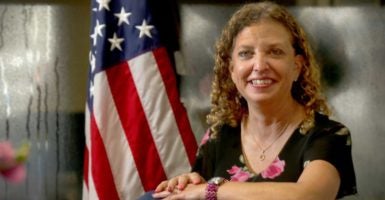 The FBI arrested Awan at Dulles International Airport July 24 as he was preparing to board a flight to Pakistan. When his wife Alvi left the U.S. for Pakistan in March, federal authorities found more than $12,000 in cash hidden in a suitcase. She had withdrawn the couple’s three children from local schools and does not intend to return to the U.S., according to the FBI.

“Defendants AWAN and ALVI did unlawfully, willfully, and knowingly conspire, combine, confederate, and agree with each other to commit offenses against the United States,” including bank fraud, false statements, and unlawful monetary transactions, the indictment said.

An arraignment date has not yet been set, and a spokesman for the U.S. attorney for the District of Columbia did not immediately respond to The Daily Caller News Foundation Investigative Group’s question about when Alvi would become a fugitive if she does not return to the U.S. voluntarily, or whether officials would seek to extradite her from Pakistan.

In addition to lying on multiple mortgage disclosures, as an affidavit alleged at the time of Awan’s arrest, the indictment claims Alvi lied by claiming medical hardship in order to withdraw hundreds of thousands of dollars from a retirement program.

The Awans, three of their relatives, and a close friend are the targets of an FBI and U.S. Capitol Police criminal investigation into allegations they committed congressional cybersecurity violations and large-scale theft of congressional property in a scheme that may have begun more than a decade ago.

The crew worked as shared IT aides for dozens of House Democrats, including many who were members of the intelligence, foreign affairs, and homeland security committees. Most of the Democrats fired them when the Capitol Police investigation became public in February, and their access to the congressional IT system was terminated.

However, Wasserman Schultz kept Alvi on her payroll until March and Awan until the day after his arrest. Authorities arrested Awan on the bank fraud charges in order to take his passport and prevent his leaving the U.S. as the investigation into their Capitol Hill activities continues.

Awan retained Chris Gowen, a longtime aide to former President Bill Clinton and former Secretary of State Hillary Clinton, to represent him shortly after his arrest. Gowen has claimed in media interviews that Alvi left the country with the children only because of lost jobs and the high cost of living in the nation’s capital. Gowen told the Associated Press that the family lives “in squalor” in Pakistan.

Gowen also told The New York Times that the Awans wired series of large sums of U.S. dollars to Pakistan as part of a long-time plan to buy property there. The couple had a combined income of $360,000 a year and owned four properties in the Washington, D.C., area, public records show.

In January, Awan—while impersonating his wife, according to the FBI—wired $283,000 from the Wright Patman Congressional Federal Credit Union.

Even after Awan’s arrest in July, it is possible more money flowed to Pakistan. On Aug. 3, he sold a home for $617,000, according to public records. Gowen declined to say if the proceeds were wired to Pakistan.

Politico reported that the Awan couple has a “friendly personal relationship” with Wasserman Schultz, former chairman of the Democratic National Committee. They are also reportedly close to another Democrat, Rep. Gregory Meeks of New York.

Wasserman Schultz resigned from the DNC in July 2016 when WikiLeaks released hacked committee emails. She has defended keeping Awan on her payroll even after she was aware he was suspected of, as she described it, “data transfer violations.” She claimed she had “racial and ethnic profiling concerns” and “would do it [keep Awan] again.”

In addition to allegations of fraud and the criminal investigation, other family members have been accused of fraud and worse by Muslim acquaintances and relatives in civil court.

Awan is currently involved in a civil case against his stepmother, Samina Gilani. Awan wanted his stepmother to sign a power of attorney document giving him access to money in Pakistan that was stored in his recently deceased father’s name. His stepmother has become homeless while the children—with a combined income of hundreds of thousands per year—are fighting her over a $50,000 life insurance policy.

She claims that Awan used his IT skills to wiretap her and his government connections to intimidate her. Gilani also said Awan told her he had the power to have people kidnapped.

Awan’s brothers, Jamal Awan and Abid Awan, also were on the House payroll at chief of staff-level salaries, and Jamal Awan filed a death certificate for his father that falsely said he was divorced. Abid Awan changed the beneficiary of their father’s life insurance policy from the wife to himself after his death, Gilani’s lawyer said.

“Imran Awan threatened that he is very powerful and if I ever call the police again, [he] will … kidnap my family members back in Pakistan,” Gilani claimed in the documents filed in Fairfax County, Virginia.