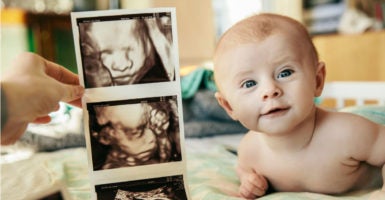 “If each machine saves the lives of just four unborn children each week, the Knights will have saved more than 1 million lives,” says Carl Anderson, CEO of Knights of Columbus. (Photo:Mareen Fischinger, Photographer Westend61 /Newscom)

An international Catholic charitable organization has announced a goal of saving 1 million unborn babies by expanding its ultrasound program.

“We know from experience that a woman who sees an ultrasound image of her child is highly likely to keep her baby,” Carl Anderson, CEO of the Knights of Columbus, said at the organization’s 135th international convention in St. Louis on Aug. 1-3.

Since 2009, Anderson says the program has saved hundreds of thousands of lives.

When the ultrasound program gets to its 10th anniversary in 2019, Anderson hopes to have 1,000 machines in service.

“If each machine saves the lives of just four unborn children each week, the Knights will have saved more than 1 million lives,” Anderson said. “Let us continue this great effort by reaching the goal of 1,000 machines as quickly as possible.”

With almost 2 million members, the Knights of Columbus was founded in 1882 by the Rev. Michael J. McGivney.

Tony Perkins, president of the Family Research Council, praised the goal of the Catholic charity organization.

“Ultrasounds are a window into the womb that give mothers the ability to see the life that is within them,” Perkins said in a statement provided to The Daily Signal, adding:

Ultrasounds make crystal clear the humanity of these children. Expectant mothers are much more likely to choose life for their babies once they get to see with their own eyes their babies in the womb. I applaud the Knights of Columbus for their efforts to provide ultrasounds for pregnancy care centers.

Jeanne Mancini, president of March for Life, which hosts the largest pro-life rally each year to mark the legalization of abortion on Jan. 22, 1973, said the Knights of Columbus ultrasound program is a significant aid to the pro-life cause.

“Their wonderful ultrasound program literally saves lives by using modern technology to testify to the beauty of life,” Mancini said in a statement provided to The Daily Signal, adding:

Thank you, Knights of Columbus for seeking to build a culture of life through prayer, words, and action. Since the very first March, the Knights have helped provide over 100 volunteer marshals to manage and control the event, in addition to countless other helps, including financially supporting the March for Life.