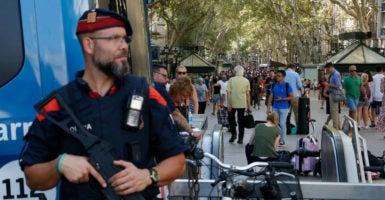 The terror plot in Barcelona was the 42nd plot in Europe to have been carried out or thwarted this year alone. (Photo: PhotoPQR/La Provence/MAXPPP)

Not so long ago, scenes of death and carnage on the streets of major European cities were a rarity.

Not so any more. In this year alone, there have been major Islamist attacks in London (twice), Manchester, and Stockholm. We can now add Barcelona to that list.

Smaller-scale acts of violence in France (on multiple occasions), Austria, and Italy have likely faded from most people’s memory, but they were inspired by the same ideology.

This is not the first time Spain has suffered from an Islamist attack. The most deadly terrorist incident of this kind to have taken place in Europe occurred in Madrid, in March 2004, when the bombing of trains killed almost 200 people.

That attack was tied to al-Qaeda. Yesterday’s attack was claimed by the Islamic State—a reminder, if one was needed, that battlefield victories in Raqqa and Mosul are welcome developments but not a panacea to the Islamist threat in Europe.

Unfortunately, Islamist ideology has now spread far and wide throughout Europe. Since 2014, there have been over 150 plots or attacks, and they have taken place in 15 different European countries.

This week’s Las Ramblas plot was the 42nd plot to have either taken place or been thwarted this year alone. Those plots average five a month.

Beyond all being adherents to Islam, there is no single profile of what kind of person partakes in these plots. There are homegrown terrorists, and then there are those who were born abroad. There are terrorists who are unemployed, and others who have jobs.

Some are very young, some are older. Some have received terrorist training abroad, some have not. Some rely on guns and knives, others on cars and bombs. Some are recruited via social media, others by personal contacts. Some target civilians, others the police or military.

So the problem is daunting in the extreme. But what can Europe do?

First, its leaders could get real about the scale and nature of the problem.

There could be an honest conversation about Islamist ideology. They could bolster Muslim reformists who are willing to tackle thorny theological issues within Islam.

European governments could commit the financial resources to enable their security services to monitor more people at home, and their militaries to fight and win battles against Islamist groups abroad.

They could refocus their efforts on improving the flow of intelligence between police and intelligence agencies domestically.

They could jail terrorists for longer and get much tougher on the deportation of foreign national security threats. They could reverse the process of mass immigration. They could even begin to re-establish borders in Europe.

And if the law prevents them from doing any of the above, they could review those laws.

In reality, little or none of the above will happen. What we will get instead are platitudes and empty talk of “standing together.”

There will be more hashtags, more vigils, and more people sitting around singing John Lennon songs. The story will fade until the next Islamist slaughter, where yet more innocent people will die and the cycle will begin again.

How high the body count must go until things change is a question only European leaders can answer. Their policies going forward will help decide the future of an entire continent.