Our Debt Problem Is Really a Spending Problem. Economic Growth Won’t Fix It. 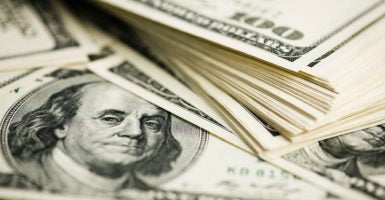 Interest payments on the federal debt, which are at historic lows, are likely to rise as the economy recovers. (Photo: iStock Photos)

Logan Cook is a member of the Young Leaders Program at The Heritage Foundation.

Two hundred and sixty-nine billion dollars. That’s a big number, and yet it’s not the amount the federal government spends on any of its major activities like defense, Medicaid, Medicare, or Social Security.

Rather, this is what the Congressional Budget Office currently projects the federal government will spend on interest payments on the debt for fiscal year 2017. This makes interest the fifth-largest federal budget item behind Social Security, defense, Medicare, and Medicaid.

Nothing to worry about, right?

Only if you’re fine with spending a growing percentage of the federal budget on something that provides no service to the American people, other than paying for past bills.

Although even in terms of payments, we’ve been relatively fortunate. Interest payments have been fairly low, despite the massive size of the national debt.

Interest rates—which help determine the size of interest payments—have been kept low over the past few years, thanks both to sluggish economic growth, the U.S. maintaining its position as a highly desirable location for investment, and the experimental monetary policies of the Federal Reserve.

However, with the economy now looking up and the Fed’s decision to raise its interest rate target, the Congressional Budget Office now predicts interest rates will “rise gradually over the next few years.”

Though, like any projection, the Congressional Budget Office’s interest estimates carry uncertainty.

U.S. creditors may eventually demand higher interest rates if they believe that the risk of default over the long run has increased significantly.

After all, the U.S. faces unsustainable fiscal projections and an apparent lack of political will to address the key drivers of spending and debt growth anytime soon.

Other factors could drive up interest as well. As Brian Riedl of the Manhattan Institute points out, the Congressional Budget Office projection “assumes no recessions, wars, terrorist attacks, tax cuts, or federal spending expansions.”

Will interest rates ever rise again to such levels?

The effect on the budget from even this moderate increase in rates will not be small. The Congressional Budget Office projects interest payments to nearly double by 2021, and to eclipse military spending by 2027, reaching $818 billion.

By that time, interest payments would have risen to become the second-largest projected budget item by 2027 (behind Social Security).

To regain control over interest payments and the national debt, lawmakers must reduce federal spending that drives growing budget deficits.

Social Security, Medicare, and Medicaid comprise well over half of the federal budget. They must be reformed.

The Heritage Foundation’s “Blueprint for Balance” draws a path to balance, including with entitlement reforms and better prioritization of federal programs. It balances in seven years, even after taxes will have been reduced from Obamacare’s full repeal.

Congress simply needs to act upon it.