How House Conservatives Plan to Revive Obamacare Repeal, and Why It Could Work 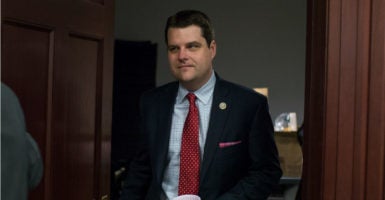 It’s time to “put the screws” to Republican lawmakers who promised to repeal Obamacare, one House member says, and that’s why he supports reviving a successful 2015 attempt to get rid of the health care law.

“We certainly can’t give up,” Rep. Matt Gaetz, R-Fla., said in a phone interview with The Daily Signal.

Gaetz was explaining why he decided to back a small caucus of House conservatives in its strategy to force a floor vote on a bill mirroring the Obamacare repeal passed in December 2015.

The House Freedom Caucus announced Friday its plan to collect the 218 signatures required on a “discharge petition” to pull that legislation out of committee.

The Daily Signal heard from eight House members on how they stand on the strategy.

“I signed the discharge petition because the things we have done so far to appease moderates in our party haven’t worked,” Gaetz, who is not a member of the Freedom Caucus, said in the interview. “So, maybe we should take a conservative approach going forward. We certainly can’t give up.”

The Freedom Caucus is pushing for a vote on the Obamacare repeal that passed House & Senate but was vetoed by Obama https://t.co/4PnFxCSdxV

The 2015 bill, passed by the House and Senate but vetoed by President Barack Obama, contained repeal of key Obamacare provisions, including the expansion of Medicaid benefits and almost all of the health care law’s tax increases.

The bill also repealed the law’s insurance mandates for individuals and employers as well and defunded Planned Parenthood.

When Republican majorities in the House and the Senate voted to repeal Obamacare in 2015, Obama was sure to veto the bill, and did, Gaetz noted.

The Florida Republican said there is no reason House and Senate Republicans shouldn’t be able to do the same in 2017, when President Donald Trump is committed to sign the legislation:

There is this theory both in the House and in the Senate that the legislation that everyone has previously voted for to repeal Obamacare would not get the votes on the floor of either body. It’s my view that the ‘I was for it before I was against it’ political narrative has proven to be unsuccessful. And so I want to put the screws to the members of my party who seem to only want to support repealing Obamacare when they don’t think it will actually happen.

Not a single Republican voted for final passage of Obamacare, formally known as the Affordable Care Act.

Whether the revived 2015 repeal bill passes in the Senate is not the point, Gaetz said.

“These days it’s reasonable to be skeptical that a Mother’s Day resolution could pass the Senate,” he said, adding:

But that shouldn’t stop our work in the House. I mean, we have a Senate that is not functional today. So, we only have two options: Raise the white flag and give up, or keep fighting. This is a cogent strategy to keep fighting, and I’m for it.

Trump has shared his frustration, including over Twitter, about Republicans’ inability to repeal and replace Obamacare.

Go Republican Senators, Go! Get there after waiting for 7 years. Give America great healthcare!

Rep. Mark Walker, R-N.C., chairman of the Republican Study Committee, the largest caucus of GOP lawmakers in the House, told The Daily Signal in an interview that he is optimistic the petition to discharge the 2015 repeal bill will succeed.

“I have no problem leading … as we continue to put pressure on the Senate from every angle possible,” Walker said. “And hopefully at some point, this could free things up enough; there’s enough pressure coming from both Republicans in Congress and people back home to get this thing done.”

Rep. Jody Hice, R-Ga., said in a statement provided to The Daily Signal that he will sign the discharge petition upon his return from the August recess.

“We cannot afford to lose momentum, and I refuse to give up on our commitments,” Hice said.

Rep. Andy Harris, R-Md., a Freedom Caucus member, said in an interview that support for the discharge petition reaches outside the caucus of more than 30 House conservatives.

“It’s not only the Freedom Caucus that supports it, but the chairman of the Republican Study Committee also announced that he’s supporting the discharge petition,” Harris told The Daily Signal, referring to Walker. “I think we should keep the position publicly that we support that repeal, just like we did in 2015.”

Harris said he is not as confident the bill would clear the Senate, but it is important that the House stay on track to repeal and replace Obamacare.

“I don’t think the Senate will take it up, to be honest with you, but I think the American people deserve to know what the House position is,” Harris said. “I think we should keep taking some action on health care repeal and reform until we get it.”

Robert Moffit, a senior health policy analyst for The Heritage Foundation, told The Daily Signal in an email that lawmakers should in essence pass the 2015 repeal bill again.

“For seven years, congressional Republicans promised that they would repeal and replace Obamacare,” Moffit said:

In 2016, Heritage proposed that Congress replicate the previous repeal bill that President Obama vetoed, and then begin to enact, through regular order, in a step-by-step process, policies that would reduce health insurance costs for millions of Americans, expand their choice of coverage options, and allow the people of the states, through their elected representatives, to make the rules for their own insurance markets. A promise is a promise.

Rep. Louie Gohmert, R-Texas, another member of the Freedom Caucus, said in a statement provided to The Daily Signal that this is the “minimum” the House can do.

“Every Republican in the House promised to vote to repeal Obamacare,” Gohmert said, adding:

We did it when Barack Obama was president. We should, at a minimum, do the same thing with a president who will actually sign it. Since the Senate passed the exact same bill that was vetoed, we need to keep pushing the same bill back to the Senate until they’re either compelled to vote for it because of their conscience, or until their constituents compel them to come home and let someone else keep that promise.

Gohmert said he will sign the petition when he returns to Washington.

Rep. Jim Banks, R-Ind., said he would do the same.

“Being back in my district for the August recess, I’m reminded as much as ever that my constituents are disappointed that we haven’t fulfilled the key Republican promise that has been made for several election cycles in a row to repeal Obamacare,” Banks, who represents northeastern Indiana, said in an interview with The Daily Signal, adding:

So that’s what motivates me to be supportive of this effort. … My constituents from my district have been waiting for this for too long  for a vote on repealing Obamacare and that’s why I intend to sign the discharge petition when we get back to Washington.

Rep. Ted Yoho, R-Fla., said he “wholeheartedly” supports the strategy. In a statement given to The Daily Signal, Yoho said:

This will force House leadership to advance the repeal of the ACA [Affordable Care Act] so that we can get rid of the failed Obamacare law once and for all. Then Republicans and Democrats can finally come together to fix health care for the American people.

Count him in, said Rep. Andy Biggs, R-Ariz., because lawmakers should be consistent.

“I think this is a great opportunity for us to keep our promises,” Biggs told The Daily Signal, adding:

This is one where you can’t just vote for something when it doesn’t count and you know it’s not going to count. This is being genuine and being real, and so that’s why I think it’s appropriate and I think it’s a good idea.