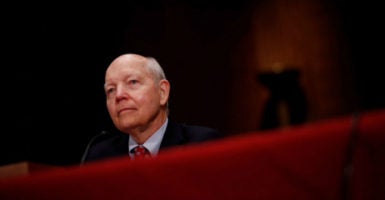 The Internal Revenue Service rehired 213 employees who ducked taxes, falsified documents, were convicted of theft, or made unauthorized use of taxpayer data, an inspector general’s report says.

The Office of Treasury Inspector General for Tax Administration, which also first discovered the IRS’ targeting of conservative groups in 2013, examined the agency’s hiring from January 2015 through March 2016.

For these 15 months, the IRS official in charge was Commissioner John Koskinen, an appointee of President Barack Obama.

House Republicans for months sought to impeach Koskinen for obstructing a congressional probe into the agency’s targeting of the applications for tax-exempt status made by nonprofit tea party and conservative groups.

“Given the substantial threat of identity theft and the magnitude of sensitive information that the IRS holds, hiring employees of high integrity is essential to maintaining public trust in tax administration and safeguarding taxpayer information,” the inspector general’s report says, adding:

Four of the more than 200 employees had been terminated or resigned for willful failure to properly file their federal tax returns; four separated [from the agency] while under investigation for unauthorized accesses to taxpayer information; and 86 separated while under investigation for absences and leave, workplace disruption, or failure to follow instructions. This includes positions with access to sensitive taxpayer information, such as contact representatives.

As a political appointee in the executive branch, Koskinen doesn’t have the civil service protections that career government employees do. President Donald Trump could order his firing at will.

“To the extent possible by law,” Bell wrote in the June 28 letter, “the IRS will take all steps allowable to prevent the rehiring of former employees with conduct and performance issues.”

Bell added that she had commissioned a team to implement corrective actions.

“This team will ensure existing hiring practices and policies are updated to reflect our use of IRS employment data, specifically any misconduct and performance prior to making a tentative offer [of new employment] to a former IRS employee,” Bell wrote.

The wealth of protections for federal employees under the civil service and union agreements “makes my head hurt,” Grover Norquist, president Americans for Tax Reform, told The Daily Signal.

“The average American is not happy with the way the IRS behaves on a good day,” Norquist said. “It’s disappointing that they are rehiring people who were fired for very bad behavior.”

Koskinen should go, Norquist said, and the sooner the better to avoid another political controversy similar to Trump’s ousting of James Comey as FBI director.

“All Koskinen would have to do is say something publicly about Trump’s taxes, and then Trump can’t fire him,” Norquist said. “Given the outrageous way he has behaved, why not move much sooner?”

Obama named Koskinen to the job in 2013, directing him to clean up the targeting scandal. But Republicans on the House Oversight and Government Reform Committee said he obstructed their probe and should be impeached.

“I don’t know why President Trump hasn’t fired John Koskinen since there is more evidence the agency is mismanaged,” said Peter Flaherty, president of the National Legal and Policy Center, a conservative government watchdog group.

“Koskinen is a very typical Washington creature and is very at home in the swamp,” Flaherty said in an interview with The Daily Signal. “It’s a puzzle to me why Trump hasn’t acted.”

The IRS already had one of the worst reputations and the most power of any federal agency, Flaherty argues.

“Against the backdrop of fear that the IRS has been used for political purposes, now you may have people who can’t be trusted with sensitive personal information,” he said.

The White House twice referred comment on Koskinen to the Treasury Department, which did not respond to a request for comment.

The IRS rehired 2,000 former employees from 2015 through early 2016, the inspector general’s report says. Many were seasonal employees, and about 10 percent were problematic.

IRS officials who make hiring decisions don’t have access to the applicant’s employment history with the agency and 27 failed to disclose on paperwork that they had been terminated, the report found.

Instances of such nondisclosure are supposed to be referred to the independent Office of Personnel Management, which the report says the IRS didn’t do.

The inspector general issued a report in December 2014 that found 824 questionable rehires from 2010 through 2013. Of those 824, a total of 60 seasonable employees were rehired in 2015 despite substantiated prior conduct and performance issues, the new report says.