Yale Covers Up Gun in Stone Carving of Puritan, Indian 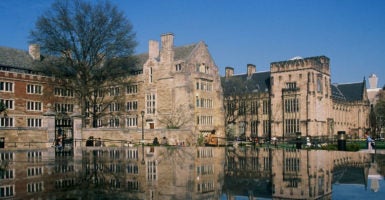 Yale University has covered up a musket on a stone carving depicting a hostile interaction between a Puritan settler and an American Indian, leaving the latter’s bow and arrow uncovered.

Yale’s head librarian, Susan Gibbons, and the school’s Committee on Art in Public Spaces decided the carving’s presence at a reopened entrance to the school’s library was “not appropriate,” according to Yale Alumni Magazine.

Gibbons said the stone covering the musket could be removed without defacing the carving.

At the York Street entrance to @yalelibrary, a Puritan has been disarmed. More at https://t.co/hzyPGKUCg6 pic.twitter.com/aXwLs5eDPi

Yale’s Committee on Art in Public Spaces said its mission is to “hear from members of the community about art and other symbolic representations related to diversity and consider ways Yale might better reflect campus and our history.”

Yale undertook another revisionist effort in February, when the school heeded the advice of a three-person panel to rename its Calhoun College residency. Two out of three of the panel members previously had signed a petition to do so.

Yale and Gibbons did not respond to a request for comment in time for publication.