Why FEMA Must Be Reformed Before Disaster Strikes 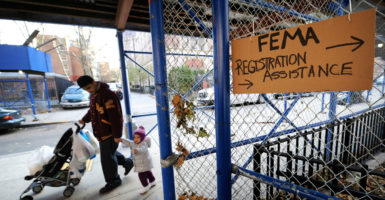 As Tropical Storm Franklin prepares to make landfall in Mexico, the Federal Emergency Management Agency (FEMA) is preparing to respond to similar situations that impact the United States.

FEMA is tasked with leading the response to these devastating disasters, but since the 1980s, its involvement in small, local disasters has been on the increase.

This trend of excessive involvement in small-scale disasters needs to change, as it ultimately makes FEMA and the United States less prepared for bigger, catastrophic disasters.

Under President George H.W. Bush, FEMA declared 174 disasters, amounting to an average of 43.5 per year. Under Presidents Bill Clinton and George W. Bush, declarations rose substantially to 716 and 1,037, respectively, averaging 89.5 and 129.6 per year.

Under President Barack Obama, declarations remained high with 854 total alerts being issued, or 106.8 on average per year.

The preponderance of these emergency declarations is troubling for multiple reasons.

Regulations and current law make it easy for local and small disasters to qualify for federal FEMA disaster money, thus forcing FEMA to spend a great deal of time, money, and assets resolving state issues that would be better handled by state authorities.

Currently under the Stafford Act, if the president declares an emergency worthy of federal assistance, 75 percent of the repair costs will be provided by FEMA. This system has created a perverse incentive for states to underprepare for disasters so as to ensure that the federal government will come to their rescue.

A cost-effective reform measure would raise the standard for how much federal money is made available during disasters.

For example, federal funding could be distributed on a sliding scale based on the severity of the incident.

If an event barely meets the threshold for federal assistance, then the state should only receive 25 percent of the disaster response costs while the most catastrophic of disasters would have the federal government cover 75 percent of the response and recovery costs.

Moreover, the Stafford Act should be amended to establish clear requirements that limit the situations in which FEMA can assist states.

One method would be to raise the minimum-dollar threshold for requesting disaster declarations. Increasing the per capita threshold to $3 would significantly reduce the number of events that would warrant a federal disaster declaration and guarantee that FEMA has enough money in its rainy day fund for when the darkest clouds approach.

Such a change would ensure that state governments and FEMA are more prepared for disasters because they will be allocating their resources in a practical and fiscally responsible manner.

FEMA is currently stretched way too thin across local disasters that would be better handled by states. By raising the threshold for what qualifies as a disaster and reforming the Stafford Act, Congress would be better equipping and preparing the American people and FEMA for when a major disaster strikes.