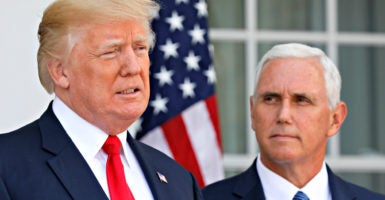 President Donald Trump said Thursday that his “fire and fury” warning to North Korea’s dictator may not have been strong enough.

He also turned up the heat on Kim Jong Un’s threats toward the U.S. territory of Guam.

“Let’s see what he does with Guam. He does something in Guam, it will be an event the likes of which nobody’s seen before, what will happen in North Korea,” Trump said, adding:

During two press conferences at the Trump National Golf Club in Bedminster, New Jersey—one before and another after a national security briefing—Trump also pressed Senate Majority Leader Mitch McConnell, R-Ky., to pass more GOP agenda items such as health care and tax reforms, and vowed to address the opioid drug crisis.

One reporter asked at the first press conference whether the Trump administration is considering a pre-emptive strike against North Korea, which intelligence officials believe has developed a miniaturized nuclear warhead to mount on an intercontinental ballistic missile.

“We don’t talk about that. We never do,” Trump said, explaining he didn’t want to reveal plans to an enemy, as he said other administrations have.

“I’m not like the other administration that would say we’re going into Mosul in four months. I don’t talk about it,” he said. “We’ll see what happens. But I can tell you that what they’ve been doing and what they’ve been getting away with is a tragedy, and it can’t be allowed.”

>>> Related: Trump Hasn’t ‘Given Any Thought’ to Firing Special Counsel

When asked whether his Tuesday promise of “fire and fury” to North Korea if it doesn’t behave was too much, Trump responded: “Maybe it wasn’t tough enough.”

Trump praised Russia and China for joining a 15-0 vote in the U.N. Security Council to place new sanctions on North Korea, and Nikki Haley for her related work as U.N. ambassador.

The president also sought to calm the nerves and fears of worried Americans:

The people of this country should be very comfortable, and I will tell you this. If North Korea does anything in terms of even thinking about attack of anybody that we love or we represent or our allies or us, they can be very, very nervous. I’ll tell you why. And they should be very nervous. Because things will happen to them like they never thought possible, OK? He’s been pushing the world around for a long time.

Trump, without naming him, was referring to Kim, head of the communist regime.

Trump already had been tough on McConnell in tweets earlier that day, responding to the Republican Senate leader’s criticism that the president had unrealistic expectations.

“They should have had this last one done,” Trump said, referring to the Senate’s failure to make progress on getting rid of Obamacare. “They lost by one vote. For a thing like that to happen is a disgrace.”

A reporter asked whether McConnell should step down as majority leader, on which Trump was noncommittal.

During the second press conference, Trump compared McConnell’s effort with that of Transportation Secretary Elaine Chao, the wife of the Senate majority leader.

The president said opioid addiction is a national emergency, and a problem across the world.