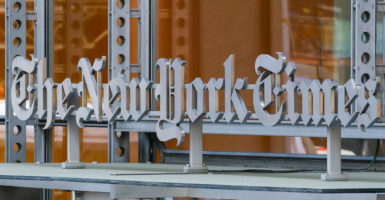 The New York Times has made many mistakes in its reporting this year, including incorrectly attributing a tweet mocking American military efforts to the North Korean government. (Photo: iStock Photos)

After The New York Times reported that the newspaper had “obtained” an unpublished government draft of a climate change report some feared President Donald Trump would suppress, it turned out the draft has been available online for eight months.

In light of this oversight Monday, which the Times since issued a correction on, here is a list of the biggest previous errors, inaccuracies, blunders, misrepresentations, and general failures from the paper of record so far in 2017.

In a June report, the Times regurgitated the baseless claim that 17 U.S. intelligence agencies agreed Russia was responsible for meddling in the 2016 election. The report in question was published roughly one month after The Daily Caller News Foundation’s fact-check team thoroughly debunked the claim.

The New York Times and other media outlets parroted the claim after former Secretary of State Hillary Clinton used it in a presidential debate. Almost a year later, after the claim was debunked in multiple high-profile settings, the Times issued a correction noting that only four intelligence agencies came to a consensus on Russian meddling in the election.

New York Times reporters incorrectly attributed a tweet mocking American military efforts to the North Korean government, when the tweet was actually the product of an account dedicated to parodying North Korean news.

The DPRK News Service claims to be the “official News feed of Democratic Peoples [sic] Republic of Korea,” but the account is run by two Americans—Patrick and Derrick, according to The Washington Post.

The Times issued a correction acknowledging it fell for the parody.

The Times misreported data from a government study on what Americans buy on food stamps, then updated the story with an additional error without issuing a correction.

The central claim of the January story, headlined “In the Shopping Cart of a Food Stamp Household: Lots of Soda,” was that the Department of Agriculture has a report showing food stamp recipients spend nearly 10 cents of every dollar on soft drinks. But that number is almost double what the report actually said.

The Times later updated the story, without issuing a correction, after a University of Arkansas professor pointed out the error on Twitter.

The updated version, however, still incorrectly stated that soft drinks are not included in the “sweetened beverages” category.

“[Food stamp] households spent 9.3 percent of their grocery budgets on sweetened beverages alone, not including soft drinks,” the article said. This is incorrect, as soft drinks are indeed included in the “sweetened beverage” category in the USDA’s full report.

Weisman’s tweet no longer appears on his Twitter page, but he sent another tweet shortly after in which he reported the news that the request came from Lynch.

An honest mistake and he apologized, but funny how we can all manage to mishear so badly– and hear exactly what we want to hear.

The tweet makes no mention of his previous mix-up.

After a man shot up Republicans’ congressional baseball practice in May, the Times used a debunked conspiracy theory to attack Palin, the former Alaska governor, in an editorial. The paper baselessly linked her campaign messaging to the shooting of then-Rep. Gabby Giffords, D-Ariz., in 2011.

“In 2011, when Jared Lee Loughner opened fire in a supermarket parking lot, grievously wounding Representative Gabby Giffords and killing six people, including a 9-year-old girl, the link to political incitement was clear,” the editorial board wrote. “Before the shooting, Sarah Palin’s political action committee circulated a map of targeted electoral districts that put Ms. Giffords and 19 other Democrats under stylized cross hairs.”

Not only is the correction baseless, but the description of the map was inaccurate as well. The map in question depicted Democratic congressional districts in crosshairs—not Democratic candidates.

After substantial public backlash, the Times heavily edited the piece and added a correction:

An editorial on Thursday about the shooting of Representative Steve Scalise incorrectly stated that a link existed between political rhetoric and the 2011 shooting of Representative Gabby Giffords. In fact, no such link was established. The editorial also incorrectly described a map distributed by a political action committee before that shooting. It depicted electoral districts, not individual Democratic lawmakers, beneath stylized cross hairs.