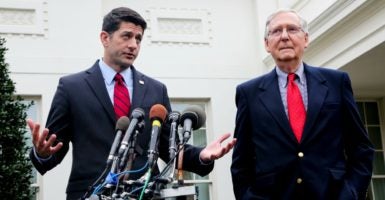 President Donald Trump is turning up the heat on Senate Majority Leader Mitch McConnell to get back to work and deliver on the promises Republicans made to the American people.

Provoked by McConnell’s complaint about Trump’s “excessive expectations,” the president tweeted three times in the span of 24 hours that he means business.

Mitch, get back to work and put Repeal & Replace, Tax Reform & Cuts and a great Infrastructure Bill on my desk for signing. You can do it!

Senator Mitch McConnell said I had "excessive expectations," but I don't think so. After 7 years of hearing Repeal & Replace, why not done?

At a Rotary Club event in Kentucky on Monday, McConnell defended Congress’ lack of progress on the agenda Republican leadership set out to tackle before the August recess.

“Part of the reason I think that the storyline is that we haven’t done much is because, in part, the president and others have set these early timelines about things need to be done by a certain point,” McConnell said. “Our new president, of course, has not been in this line of work before. And I think he had excessive expectations about how quickly things happen in the democratic process.”

It was McConnell, however, who laid out ambitious goals for the GOP’s 200-day agenda at a January retreat in Philadelphia.

>>> Related: 13 Ways Trump Has Rolled Back Government Regulations in His First 100 Days

Those goals included repealing and replacing Obamacare, reforming the tax code, funding the border wall, confirming a justice to the Supreme Court, raising the debt ceiling, and addressing regulations handed down by President Barack Obama.

At the 200-day mark, Congress has yet to deliver on many of the goals it planned to meet by the August recess. Lawmakers won’t return to Washington until after Labor Day in September.

So far this year, the House has taken steps to fund Trump’s border wall and the Senate has confirmed Neil Gorsuch to the Supreme Court. And using the Congressional Review Act, Trump worked with Congress to rescind more regulations than any other president.

But with Obamacare repeal unfinished and big challenges ahead on tax reform, the debt limit, and a government spending bill, there’s little time left for Congress to act.

Trump criticized McConnell along the same lines at two separate press conferences Thursday, saying at one point in response to a question on whether the Senate majority leader should step down:

At the Rotary Club event, McConnell lamented what he called “artificial deadlines.”

“So part of the reason I think people feel we’re underperforming is because too many artificial deadlines—unrelated to the reality of the complexity of legislating—may not have been fully understood,” he said.

The Daily Signal sought comment from a key McConnell aide, who did not respond by publication deadline.

The Conservative Partnership Institute, a right-leaning policy and education organization, pointed out that when Congress returns from its break on Sept. 5, many of the goals it planned to meet before the August recess still remain, which include:

“The 200th day of 2017 fell on July 19,” CPI wrote in a recent blog post. “If you start the clock on the day of Trump’s inauguration, the 200th would have been August 8. By the standard of either date, Republican control of Congress and the Presidency for the first time since 2006 has little to show in legislative gains.”

Rep. Dave Brat, R-Va., told The Daily Signal in an interview that he hopes the Senate will be more proactive in taking up items passed by the House.

“The House is at least putting things across the finish line, in terms of passing legislation, and the Senate is just way behind,” Brat said.

Brat said one item the House has passed that the Senate should address is the Financial CHOICE Act.

The Financial CHOICE Act, which the House passed June 8, seeks to eliminate policies of the 2010 Dodd-Frank law, which was put in place following the 2007-2008 financial crisis.

Dodd-Frank instituted significant regulations on banks and expanded the influence of the federal government in the economy, The Daily Signal previously reported.

“The more on the CHOICE Act and the financial deregulation that [the Senate] can accomplish, the better that will be for markets and the underlying real economy,” Brat said. “We cannot afford to have a hiccup in the economy.”

Brat said he hopes the House and Senate speak with one voice when Congress moves to address tax reform.

“We are all waiting to see tax reform and so it would be good to have leadership especially in the Senate tell us ahead of time what are they willing to vote for so we know what target we are aiming at,” Brat said.

Brat spoke of the commitment to keeping promises:

What we’re finding out is that there are a lot of Republicans who run on the Republican platform and these items to repeal Obamacare and lower taxes, but when it comes down to it, they have not been honest with their constituents and with the American people who they represent when they vote up or down on a daily basis.

The Trump administration indicated openness to a bipartisan fix to Obamacare Wednesday, due to the GOP’s failure to fix the law, the Los Angeles Times reported.

House Speaker Paul Ryan, R-Wis., tweeted Thursday and contested the idea that Congress is not getting work done.

People may turn on the TV and think all of us in this bubble just spend our time bickering. In reality, very important work is getting done. pic.twitter.com/J3Dvl9eTl2

House Republicans developed DidYouKnow.gop, a website showcasing all of their legislative wins leading up to the August recess.

“House Republicans aren’t distracted by the newest countdown clock on cable news or partisan sniping in Washington, D.C.,” the website reads. “You don’t care about those things. You care about finding a good job, taking care of your family, and achieving the American Dream, and so do we.”

>>> Commentary: 5 Ways the House Is Working to Improve Americans’ Lives

Writing for The Daily Signal last week, Rep. Cathy McMorris Rodgers, R-Wash., outlined ways Republican leadership has made an impact before August recess. She cited legislation cutting the regulatory burden and support for veterans of the military:

Did you know that the House of Representatives has passed more than 269 bills this year?

You won’t hear that story told when you turn on the TV. For example, the same day the House passed a bill to overhaul Dodd-Frank and end big bank bailouts was the same day former FBI Director James Comey testified in front of the Senate.

Guess which got more media coverage?

McMorris Rodgers noted that the House passed more than 269 bills so far in 2017.