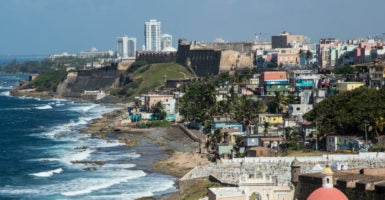 Bankrupt Puerto Rico has awarded nearly $11 million in consulting contracts to various businesses, including marketing, lobbying, and public relations firms, some with ties to government officials.

The U.S. territory, which filed for bankruptcy in May, recently closed nearly 200 schools to save $7 million. Yet officials on the Caribbean island also issued 107 consulting contracts since January to questionable recipients, according to government documents and media reports compiled by QE Intelligence, a research firm.

Puerto Rico spent $256 billion in federal funds from 1990 through 2009, but collected only $74 billion in tax revenue, according to an Economist report. Additionally, Puerto Rico is required to prioritize payments to creditors, except to fund essential services.

About $4.7 million in consulting contracts went to companies with ties to government officials, more than $800,000 of which were public relations groups.

More than $2 million in consulting contracts went to other lobbying, market research, and public relations firms without apparent government ties. More than $700,000 went to businesses with histories of shady dealings in government contracts.

The Municipal Consultants Group, for example, has received three consulting contracts for a total of nearly $250,000 since January, comptroller records show. The firm faced scrutiny and requests for investigations after it was discovered it shared office space and personnel with a group hired to audit Municipal Consultants’ government contracts.

Another four consulting contracts worth more than $350,000 total were awarded to firms founded by Oscar Santamaria, who previously faced investigations regarding other contracts and Rosello’s pension.

The other, the MAC Group, which received more than $364,000, seems to have no actual website and little information is included in its founding documents.

The bulk of another $2.6 million in consulting contracts went to the Ankura Consulting Group. The firm’s Puerto Rico office opened Feb. 14, and it received a $2.4 million award nine days later.

Another group received a $40,000 contract, which was 10 times more than the company’s worth. One business got a consulting contract of more than $34,200  the same month the firm was formed, documents from the Puerto Rico secretary of state and comptroller show.

Meghan Flynn contributed to this report.