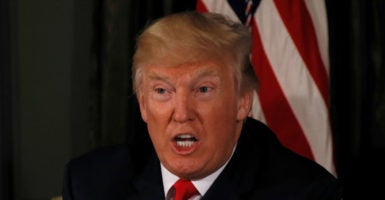 President Donald Trump issued his strongest warning yet to North Korea after published reports that the communist dictatorship has developed a nuclear warhead.

“They will be met with fire and fury like the world has never seen,” @POTUS says.

“North Korea best not make any more threats to the United States,” Trump said Tuesday from a side room in the clubhouse at his golf course in Bedminster, New Jersey, where he is on a working vacation. Referring to dictator Kim Jong Un, the president added:

Trump’s remarks came at 3:55 in this video in which he discusses the opioid drug crisis:

Trump’s warning came after the Defense Intelligence Agency determined that North Korea had produced a miniaturized nuclear warhead, according to a report by The Washington Post. The Post’s account said the communist regime had not yet tested the capability.

Experts contend no good solutions exist for responding to the nuclear threat posed by Kim.

The United Nations Security Council unanimously approved new sanctions—with the rare support of Russia and China—to ban coal and other exports to North Korea valued at more than $1 billion.

North Korea’s state-run Central News Agency called the sanctions a “violent infringement of its sovereignty.” It added: “We will make the U.S. pay by a thousand-fold for all the heinous crimes it commits against the state and people of this country.”

In a prepared statement, Klingner said of The Washington Post’s report on North Korea’s nuclear warhead for its intercontinental ballistic missile:

We should not be surprised by today’s report. When I was in the CIA, we produced an unclassified estimated in 1999 that predicted North Korea would be able to threaten the continental U.S. with a nuclear tipped missile by 2015. We may have been off a few years, but it is not unexpected. Previously, four U.S. four-star generals said they assume, or have to assume for planning purposes, that North Korea has the ability to hit the U.S. with nuclear weapons.

Klingner also was critical of the president’s words to reporters:

President Trump’s comments sound as if they were penned by Pyongyang. His statement is unhelpful and will affirm growing perceptions that the U.S. is considering a preventative military attack against North Korea. Statements by [Secretary of State Rex] Tillerson and [national security adviser H.R.] McMaster indicate that military options are on the table if North Korea reaches a technological level deemed dangerous and Trump has asked the military to prepare a preventative attack option. But Secretary of Defense [James] Mattis warned off the catastrophic consequences of such an attack.