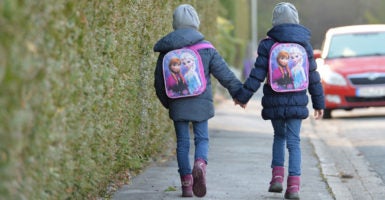 David and Hannah Edwards say they had "no choice" but to move their child, H.E., to a new school because of "ongoing bullying for her gender expression." (Photo: Picture Alliance/Frank May/Newscom)

After facing a lawsuit over its treatment of a kindergartener who identifies as transgender, a nationally recognized public charter school in Minnesota has agreed to adopt a far-reaching inclusionary policy.

In the settlement, Nova Classical Academy promised to establish a gender inclusion policy that doesn’t allow parents to opt out “based on religious or conscience objections,” and also “not [to] call parents’ or guardians’ attention to the policy.”

The agreement ends a 16-month legal battle between the charter school and David and Hannah Edwards, parents of a child who was born male but presents as a girl.

The Edwardses filed a complaint against Nova Classical Academy, in St. Paul, Minnesota, claiming the school “failed to protect their child and other gender nonconforming and transgender students at Nova from persistent gender-based bullying and hostility.”

They also claimed the school “denied their child the ability to undergo a gender transition at Nova in a safe and timely way.”

Gender Justice, a nonprofit legal and advocacy organization for LGBT individuals, represented the Edwardses in the suit against Nova Classical Academy.

The school initially denied the allegations, but Gender Justice announced Monday that both parties had reached an agreement “through a confidential mediation process.”

In addition to committing to revise its gender inclusion policies to protect and respect lesbian, gay, bisexual, and transgender students, Nova Classical Academy agreed to “pay damages of $120,000 to Hannah and David Edwards and their minor child, H.E.,” Gender Justice said in a press release.

Nova Classical Academy is a K-12 public charter school that enrolls 920 students. Based on the 2013-14 school year, U.S. News and World Report ranked its upper school as the No. 1 high school in Minnesota and the No. 16 high school in the nation.

The Daily Signal covered fallout from the case last year, quoting parents who objected to the proposed gender inclusion policies.

According to Gender Justice, “the policy changes at Nova Classical Academy are already underway.”

The child in question, however, now attends a different school, apparently as a first-grader.

According to the press release, the terms to which Nova Classical Academy agreed state:

‘Opt Out’ Not Allowed