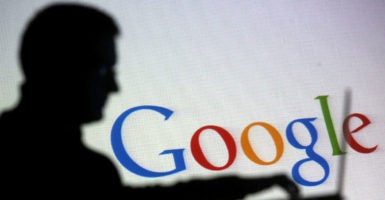 "This is another sad example of how afraid too many people—and companies, organizations, and even colleges—have become of actual discussion of ideas,” says Carrie Lukas of Google. (Photo: Dado Ruvic/Reuters /Newscom)

Women in leadership roles are among those expressing disappointment that tech giant Google fired a senior software engineer for writing and distributing a memo ruminating on evidence that men and women are different.

Heather Mac Donald, a fellow at the Manhattan Institute and contributing editor to City Journal, told The Daily Signal in an email that conclusions reached by the fired Google employee, James Damore, were fair.

Damore’s memo was a reasoned, careful analysis of the emerging knowledge of gender differences, as well as a thoughtful call for a reassessment of Google’s monolithic political culture. And yet like Harvard’s former president, Larry Summers, he has lost his job because he dared to challenge the dominant narrative about absolute gender equality in every cognitive competence and emotional orientation.

Larry Summers, a past president of Harvard University, drew controversy in 2005 when he said men perform better than women in academic areas such as math and the sciences, and that mothers’ wariness of long office hours helps account for a shortage of women in senior positions in science and engineering.

Damore said men and women are especially gifted in various abilities due to biological makeup. In his memo, he wrote at one point:

The distribution of preferences and abilities of men and women differ in part due to biological causes and … these differences may explain why we don’t see equal representation of women in tech and leadership. Many of these differences are small and there’s significant overlap between men and women, so you can’t say anything about an individual given these population level distributions.

Carrie Lukas, president of the Independent Women’s Forum, said in a statement sent to The Daily Signal that Google was wrong to fire Damore.

“This is another sad example of how afraid too many people—and companies, organizations, and even colleges—have become of actual discussion of ideas,” Lukas said. “This employee offered a thoughtful and entirely defensible perspective on a topic that needs honest debate, and was sadly punished for it.”

>>> Video Commentary: Why Did Google Freak Out and Fire an Employee for Spurring ‘Honest Discussion’?

Christina Hoff Sommers, a resident scholar at the American Enterprise Institute, where she studies the politics of gender and feminism, told The Daily Signal in an email that Damore’s firing is political:

Google has excommunicated James Damore for crimes against the Pink Police State. Damore’s memo was awkward—but civil and mostly reasonable. Women who disagreed were free to shoot back a reply—or better yet, challenge him to a code-off. Instead, moral panic ensued.

“Google claims to welcome viewpoint diversity—[but actually does so only] as long as those viewpoints accord with their own,” Sommers said.

Damore, 28, had worked for Google since 2013 after receiving his doctorate in systems biology from Harvard.

In his memo, Damore said fewer women than men may work in technology because of different interests:

Women generally also have a stronger interest in people rather than things, relative to men, also interpreted as empathizing vs. systemizing. These two differences in part explain why women relatively prefer jobs in social or artistic areas. More men may like coding because it requires systemizing.

In a prepared statement provided to The Daily Signal, Google CEO Sundar Pichai said parts of Damore’s circulated memo violated the company’s code of conduct because of its “harmful gender stereotypes”:

[W]e strongly support the right of Googlers to express themselves, and much of what was in that memo is fair to debate, regardless of whether a vast majority of Googlers disagree with it. However, portions of the memo violate our code of conduct and cross the line by advancing harmful gender stereotypes in our workplace.

Penny Nance, president and CEO of Concerned Women for America, told The Daily Signal in a phone interview that she expects Damore’s case to go to court.

“I am surprised that Google fired him … because I believe it is illegal,” Nance said, adding:

The Supreme Court under Rutan v. Republican Party of Illinois in 1990 specifically said that viewpoint discrimination is illegal for employment purposes. And the other thing is I don’t think they are doing women any favors.

In Rutan v. Republican Party of Illinois, the high court held that “promotion, transfer, recall, and hiring decisions involving low-level public employees may be constitutionally based on party affiliation and support,” according to Cornell University Law School.

But Ryan T. Anderson, a senior research fellow at The Heritage Foundation, noted that a private company makes its own decisions on who to hire and fire.

This firing, suggested Anderson, author of the book “Truth Overruled: The Future of Marriage and Religious Freedom,” highlights an inconsistency on the left.

“Google is free to operate in accordance with its anti-science androgynous belief system,” Anderson told The Daily Signal in an email.

The Manhattan Institute’s Mac Donald said the story may have been different if Damore was a woman.

“Firing a female would put you further in the red, so you want to hold on to your females at all costs,” she said, adding:

So it is a question of whether the diversity imperative here [that is] improving the female to male ratio trumps the imperative for ideological conformity. They certainly would have had to think more about their decision, but whether a female would have ultimately been spared the ax is difficult to predict.  Maybe she would have been sent to re-education camp.