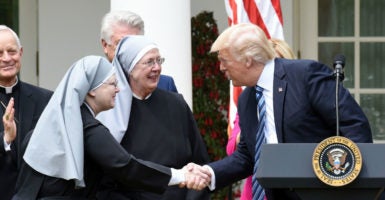 After meeting with President Donald Trump in the Oval Office on May 4, I sat in the Rose Garden and listened as the president promised the Little Sisters of the Poor that their “long ordeal” with the government’s contraceptive mandate “would soon be over.”

Yet here we are, nearly three months later, and the Health and Human Services (HHS) mandate still stands as part of Obamacare.

For four years, the Little Sisters and many other faith-based nonprofit groups have patiently asked the government to do the right thing and let them serve the poor. In a pluralistic society like ours, people should be free to serve the common good without compromising their moral or religious convictions.

The HHS mandate, requiring employers to cover contraceptive and abortion-inducing drugs and devices, has tested this country’s commitment to a healthy pluralism.

Read the full article at The Hill.