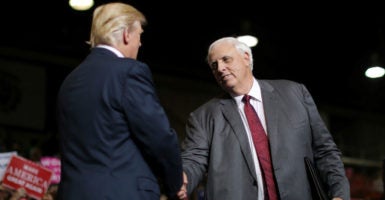 Republicans now control the governorship and legislature in 26 states, as West Virginia’s governor announced his switch from Democrat during a rally Thursday night with President Donald Trump.

“The Democrats walked away from me,” West Virginia Gov. Jim Justice said at the rally in Huntington, West Virginia. “I can’t help you any more being a Democrat governor.”

Tommy Binion, director of policy outreach at The Heritage Foundation, told The Daily Signal in an interview that this development illustrates the energy in the Republican Party.

“This is a pure momentum thing,” Binion said. “It is a great victory for the president in that it shows that people and the enthusiasm are with him and the Republican Party.”

Justice’s announcement gives Republican’s control of 34 governorships, the most the party has possessed since 1922, according to Ballotpedia.

Trump welcomed Justice to the GOP fold and complimented the governor’s character.

“Having Big Jim [Justice] as a Republican is such an honor,” Trump said. “Fantastic man, fantastic guy.”

Justice, 66, was elected in November with 49 percent of the vote, trailing Trump by 20 points in West Virginia, the Los Angeles Times reported.

>>> How a Billionaire Democrat Running for Governor Won in Trump Country

With Republicans also holding the majority in both the U.S. House and Senate, Binion said, Justice’s announcement contradicts the dominant media narrative.

“[This] is different than the narrative being carried in the mainstream media, but it is clear this morning that the enthusiasm is with the Republican Party,” Binion said.