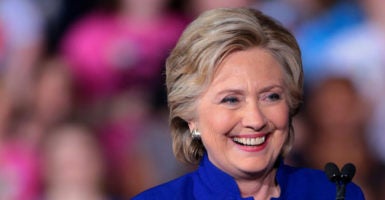 Judicial Watch obtained the documents as part of a lawsuit filed after the State Department failed to respond to a March 2015 Freedom of Information Act request.

The newly obtained documents include 91 email exchanges involving Clinton when she was secretary of state that were not turned over to the State Department, the group said.

It said the documents contradict Clinton’s claim that, “as far as she knew,” she had turned over all of her government emails, sent via a personal email account using a private server while she was secretary of state.

The emails reveal multiple instances in which Abedin used her personal account to send and receive classified documents as well as arrange personal favors for Clinton donors and political allies on behalf of the 2016 Democratic nominee for president, Judicial Watch said.

In one example, Miguel Lausell, a Puerto Rican telecom executive and donor of over $1 million to the Clinton Library, requested through Clinton Foundation executive Doug Band that a specific candidate be considered for the U.S. ambassadorship to the Dominican Republic.

The following day in April 2009, a Clinton aide passed Lausell’s message to the secretary of state’s special assistants and instructed them to “make sure there is a response.” It remains unclear whether the person in question received the ambassadorship, as the name is redacted.

In a similar example of apparent preferential treatment for Clinton donors, the managing director of left-wing fundraising organization Democracy Alliance, Kelly Craighead, emailed Abedin asking her to “reach out” to an “extremely loyal supporter” who was awaiting a response regarding an application for a senior position at the State Department.

One year later, in April 2010, Craighead reached out again with a State Department personnel request.

“It would mean a lot to me if you could help or advise on a personnel situation for a dear friend,” Craighead said.

Abedin appears to have prioritized the request. “We love [name redacted]. Looking into this asap,” she responded.

“Justice Department officials are in court repeatedly and regularly defending Clinton’s conduct,” Fitton told The Daily Caller News Foundation. “The sheer number of instances of influence peddling and pay to play we’ve reached passes the point of critical mass for something to be done.”

“Someone who doesn’t feel the need to protect Clinton or Obama could make a clear-eyed decision. You want to reassure people that justice is being administered clearly.”

Fitton argued that Trump will need to assume a more active role if the Justice Department is to launch a thorough investigation into Clinton’s conduct.

“If [Trump] wants something done, he’s gotta do it himself, and I think he knows it,” he said.