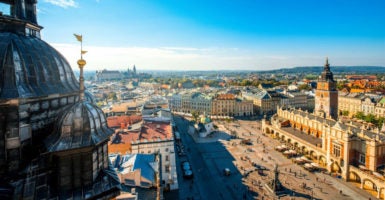 The European Union came close to stripping Poland of its voting rights in the EU Council over an internal debate about judicial reform. (Photo: iStock Photos)

The European Union, which has long interfered in the affairs of sovereign European nations, looks to be meddling in the political affairs of Poland.

On Tuesday, July 25, the president of Poland, Andrzej Duda, signed one of three controversial bills that would reform the judiciary to combat corruption, according to the ruling party. To the opposition, the proposed changes may lead to a more authoritarian form of government.

The arguments on both sides of this debate are persuasive.

Regardless of what one thinks about Poland’s judicial reform debate, this should remain a matter for the people of Poland to decide and nobody else. This is why the European Commission’s recent intervention is troubling.

Article 7 gives the EU the power to strip a member state of its voting rights in the EU Council. For any EU member, this action would be a draconian measure and a further reduction of national sovereignty in the increasingly supranational EU.

But in the case of Poland, the impact would be especially significant. Voting power in the council is weighted by population size. If the European Commission succeeded in disenfranchising the EU’s sixth most populous member (soon to be fifth after the United Kingdom leaves in 2019), it would mean that Germany and France could more easily form a blocking minority in the council.

This would further consolidate power along a Berlin-Paris axis—often not in the interest of those members in Central and Eastern Europe.

This begs the question, how does disenfranchising Poland not contradict the values of the European Union? The use of Article 7, in itself, would be an affront to those common values the European Union pledges to uphold.

An unelected group of eurocracts—not representative of a particular country—should not determine the lives of others.

Moreover, these methods by the European Union have backfired before.

Although Article 7 has never been used, the European Commission has taken similar steps to combat perceived nationalist sentiments in Austria in 1999—though those sanctions were ultimately repealed.

The sanctions were repealed for two reasons.

First, the allegations against Austria were found to be contrary to the truth—Austria was in fact more democratic than many other EU members. Second, distaste for the European Union increased because the sanctions proved the hypocritical nature of the EU—it is used as a tool against smaller member states.

The fact remains that using Article 7 against Poland, a democratic country, is a ridiculous proposition made only more preposterous by the fact Article 7 can be requested by a group of unelected officials in Brussels.

Regardless of what one’s views or opinions are regarding the proposed judicial reforms in Poland, the European Commission should not be able to disenfranchise a member state.

The people of Poland are not new to self-rule. During the height of the Soviet Union’s oppressive, forcefully atheistic regime, the people famously shouted, “We want God!” during a visit from Pope John Paul II.

Poland should not be stripped of its voting rights in the EU Council.

Today it is Poland, but tomorrow it could be any other small country in Central and Eastern Europe.