The Fascist Roots of the American Left 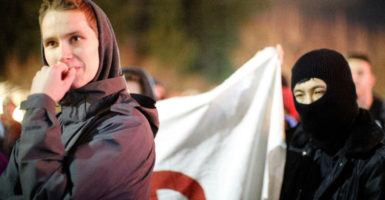 Protesters gather at the University of California, Berkeley to shut down a scheduled speech by Milo Yiannopoulos. (Photo: Paul Kuroda/Zuma Press/Newscom) 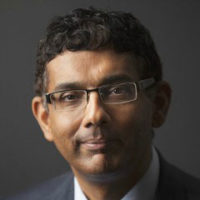 In 1925 the Jewish philosopher Theodor Lessing spoke out against the repressive political climate of Weimar Germany.

Although Lessing’s explicit target was the cravenness of the Weimar regime of Paul von Hindenburg, his real target was the emerging power of Nazism, and he blamed the government for yielding to it.

The Nazis recognized immediately the threat posed by Lessing. Adolf Hitler youth at Lessing’s University of Hanover formed a “committee against Lessing.” They encouraged students to boycott his lectures.

Nazi youth then showed up and disrupted Lessing’s classes. Lessing was forced to give up his academic chair the following year.

In his account of what happened, Lessing later wrote that he could do nothing to prevent being “shouted down, threatened and denigrated” by student activists.

He was helpless, he said, “against the murderous bellowing of youngsters who accept no individual responsibilities but pose as spokesman for a group or an impersonal ideal, always talking in the royal ‘we’ while hurling personal insults … and claiming that everything is happening in the name of what’s true, good and beautiful.”

In March 2017, the eminent political scientist Charles Murray showed up to give a lecture on class divisions in American society at a progressive bastion, Middlebury College in Vermont.

Hundreds of protesters who deemed themselves “anti-fascists” gathered outside McCullough Student Center where Murray was scheduled to speak and engage in dialog with Middlebury political scientist Allison Stanger.

Murray is a libertarian who leans Republican, although he’s no fan of President Donald Trump. Unlike Lessing, who taught at the university where he was harassed, Murray doesn’t teach at Middlebury, which is virtually devoid of conservative faculty.

(Stanger is a moderate Democrat affiliated with the New America Foundation.)

In any event, the discussion promised to be a scholarly and illuminating one, giving students a perspective that they never get. But the Middlebury protesters were having none of it.

The activists confronted Murray and Stanger, and at one point they struck Stanger. Inside Wilson Hall, protesters turned their backs to Murray and began to boo and shout epithets like “racist” and “Nazi.”

Murray found he simply could not be heard. College officials escorted Murray and Stanger to another location where their conversation had, for safety reasons, to be shown on closed-circuit television.

After the event, according to Middlebury spokesman Bill Burger, Murray and Stanger were “physically and violently confronted by a group of protesters.” The protesters were masked in the standard Antifa style.

Murray and Stanger ducked into an administrator’s car, but the protesters attacked the car, pounding on it rocking it, and seeking to prevent it from leaving.

“At one point,” Burger said, “a large traffic sign was thrown in front of the car. Public safety officers were able, finally, to clear the way to allow the vehicle to leave campus.”

According to Burger, “During the confrontation outside McCullough, one of the demonstrators pulled Stanger’s hair and twisted her neck. She was attended to at Porter Hospital later and is wearing a neck brace.”

Murray praised campus security officers for the protection they provided but described what he experienced as “scary, violent mob action.”

This is so-called progressive anti-fascism, American style, circa 2017.

Why does this purported anti-fascism on the part of progressives so closely resemble the fascism that it claims to be opposing? More profoundly, what is “anti-fascism” as the term is now used on the American left?

To answer these questions, we turn to the founders of the so-called anti-fascist movement on the progressive left, the sociologist Herbert Marcuse of the Institute for Social Research in Frankfurt am Main, Germany.

Much has been written about the Frankfurt School and its leading intellectuals, Theodor Adorno, Max Horkheimer, and most of all Marcuse.

These mostly-lionized accounts stress that the Frankfurt group was made up of refugees from Nazi Germany, Jews fleeing the prospect of Holocaust. Consequently, the credibility of these men in formulating an anti-fascist doctrine has gone largely unquestioned.

In reality, the Frankfurt School’s relationship to Nazism is much more complicated. Marcuse, for instance, was a student and devotee of the philosopher Martin Heidegger, and Heidegger was a lifelong anti-Semite and member of the Nazi Party who championed Hitler’s rise to power.

Heidegger viewed his entire philosophy as laying the foundation for the “blood and soil” doctrines of Nazism. Even after the war, Heidegger refused to condemn Nazi atrocities.

Marcuse did break with Heidegger and flee Germany, but the break was entirely over the issue of anti-Semitism and the personal danger that Hitler’s policies posed for Jews in general and Marcuse in particular. Herbert Marcuse emigrated to the United States in 1934, having been a prominent member of the Frankfurt School. (Photo: picture-alliance/dpa/Newscom)

Arriving in America, Marcuse taught at Columbia and Brandeis and also worked in Washington, D.C., for the Office of War Information and the Office of Strategic Services, forerunner to the CIA.

Here I want to focus on the idea that Marcuse is probably best remembered for, one that could not be more pertinent today.

This idea was unveiled in a famous essay he wrote called “Repressive Tolerance.” This essay was published along with several others in a book published in 1970 called “A Critique of Pure Tolerance.”

Let’s follow the argument of the essay because it provides the basis for the vicious intolerance that the left currently unleashes against all forms of dissent in our culture.

The bullying and terrorizing of conservatives on campus, the shaming of Republicans in the media, the defilement of the American flag, the disruption of Trump rallies—all of this behavior receives its moral justification in Marcuse’s famous—or infamous—essay.

Marcuse begins by admitting that all other things being equal, classical liberal virtues like tolerance and free speech are desirable. But, he says, given the class structure of society in which ruling groups have most of the power, and disenfranchised groups have very little, “the conditions of tolerance are loaded.”

Therefore, Marcuse argues that a general principle of liberal tolerance—tolerance toward all viewpoints—should be abandoned.

“Tolerance cannot be indiscriminate and equal with respect to the contents of the expression, neither in word nor in deed; it cannot protect false words and wrong deeds which demonstrate that they contradict and counteract the possibilities of liberation.”

Marcuse was nothing if not blunt about what he advocated: “the systematic withdrawal of tolerance toward regressive and repressive opinions.” What specifically did Marcuse seek to repress?

He cited “the withdrawal of toleration of speech and assembly from groups and movements which promote aggressive policies, armament, chauvinism, discrimination on the grounds of race and religion, or which oppose the extension of public services, Social Security, medical care, etc.”

Moreover, Marcuse added, his approach “may necessitate new and rigid restrictions on teaching,” including the suppression of certain types of “scientific research.”

Marcuse’s argument has been summed up in the phrase: No toleration of the intolerant. In the 1960s, Marcuse acolytes used a similar chant, “No free speech for fascists.”

At first glance, “no free speech for fascists” sounds like an unobjectionable idea. But upon reflection, it becomes problematic.

Don’t all citizens under the Constitution have equal rights, and if so don’t they have the same rights to free speech, free assembly, and so on? If so, then fascists have those rights too. So on what basis can fascists in America be denied rights?

Since Marcuse intends this, he obviously does not believe in equal rights for all citizens, and neither, apparently, do his modern-day followers.

Moreover, not once does Marcuse demonstrate that the groups he intends to repress are in fact fascist. Marcuse’s targets are not Nazis but rather patriots, Republicans, conservatives, and Christians.

The real meaning of Marcuse’s essay is: No free speech for patriots and conservatives. No toleration for capitalists and Christians.

Of course, the fascists and Nazis themselves sought to undermine the institutions of liberal democracy, such as free speech and tolerance, in precisely the way Marcuse recommends.

This excerpt was taken with permission from Dinesh D’Souza’s new book “The Big Lie: Exposing the Nazi Roots of the American Left” (Regnery Publishing, 2017).