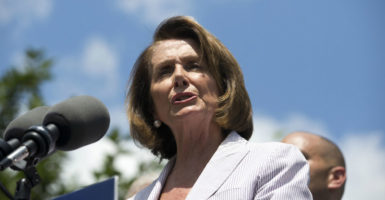 Unfortunately, the press releases accompanying the launch of the “Better Deal” initiative outline general policies that would undermine economic opportunities for Americans and harm American consumers.

In other words, this initiative flunks basic truth in labeling standards. More accurately, it constitutes “a worse deal” for Americans.

First, the initiative calls for “rais[ing] the wages and incomes of American workers and creat[ing] millions of good-paying jobs.”

To this end, it calls for government “investment” in job creation projects, “fighting back” against corporations that outsource American jobs, and “ensur[ing] a living wage” for all Americans—a proposal that suggests a higher government-set minimum wage.

But all of these suggestions would harm, not help, the American workforce. As Heritage Foundation research shows, government spending does not encourage private businesses to expand or entrepreneurs to start new firms—for instance, the 2009 fiscal stimulus did not boost employment.

Moreover, higher minimum wages merely price less-skilled entry-level workers out of the workforce, reducing the portion of Americans who work. “Fighting back” against corporations that outsource does not create an incentive for them to expand employment.

Rather, as Heritage scholar David Kreutzer put it, “the best wage [and employment] policy is a pro-growth economic environment. A vibrant economy increases wages and jobs at the same time.”

Key to a pro-jobs, pro-growth economic policy is a reduction in government burdens imposed on the private sector, through a variety of reforms highlighted by The Heritage Foundation’s “Solutions 2016” report.

These include preventing inefficient fiscal stimuluses, repealing regulations that drive up prices, eliminating unnecessary occupational licensing rules that bar capable people from the job market, repealing laws (including Obamacare and the harmful provisions of the Dodd-Frank banking law) that give rise to economically harmful regulations, and repealing the job-killing Davis-Bacon Act that requires federal construction contractors to pay union rates.

Tax reform to lower individual and business tax rates and simplify the tax code, also outlined by The Heritage Foundation, would further reduce disincentives to hiring.

The “Better Deal” proposal also urges reducing the cost of living for families by “lower[ing] the crippling cost of prescription drugs” and “cracking down on monopolies and the concentration of economic power.”

Unfortunately, the prescription drug proposal would empower the federal government to regulate drug prices, creating an enormous disincentive for U.S. pharmaceutical companies to investment in research and development, which is key to improving medical outcomes and discovering the cures of the future.

Thus, American medical care would worsen over time, and shortages would afflict price-controlled drugs—a very bad deal for all Americans.

In short, as Heritage Foundation research shows, legislated price controls for drugs—and for medical care in general—simply do not work.

Reforms of government regulatory overreach and other barriers to pharma competition (and to health care sector competition in general) are a better solution that would avoid this problem.

The notion that Americans would benefit from crackdowns on “monopolies” and “concentrations of economic power” also misses the mark.

As I explained in a recent commentary, this “Better Deal” proposal is nothing less than a meritless attack on the largely bipartisan, economically centered enforcement of American antitrust law that has prevailed over the last 30 years.

It rehashes the discredited “big is bad” arguments that were rejected decisively by economic research over 40 years ago.

In fact, prices of important consumer goods have fallen in relative terms in recent years, and quality has increased astronomically, particularly in the high tech sector—think smartphones, for instance.

>>> Check out The Heritage Foundation’s proposals on health care, taxes, and regulatory reform.

Finally, the “Better Deal” promises to “build an economy that gives working Americans the tools to succeed in the 21st century” through a grab bag of government initiatives—including tax incentives for workforce training and education, ensuring the spread of high-speed internet service, government apprenticeships for millions of new workers, and ensuring that “start-ups and small businesses can compete and prosper.”

But once again, the “Better Deal” is misguided in asserting that government can kick-start the economy by creating special regulatory and tax “breaks” for favored activity, such as apprenticeships, worker training, and the launching of specified new businesses.

The problem is not that government is doing too little to spark the economy, but rather that it is stifling the economy through overregulation and overtaxation.

Left to their own devices, free of excessive regulatory and tax burdens, businesses will have a strong incentive to start and grow their enterprises, hiring and training new workers in response to demand in the marketplace.

In sum, the congressional Democrats’ “Better Deal” initiative is correct to be concerned about the economic plight of many Americans, but its diagnosis and proposed cures are all wrong. It sees “inadequate” government involvement and proposes new public sector oversight, programs, and regulations.

It should focus instead on how to undo the regulatory mess and tax burdens that have sapped American economy vitality and kept too many Americans from pursuing the American dream.