Get Involved Locally. You Might Just Save the Country. 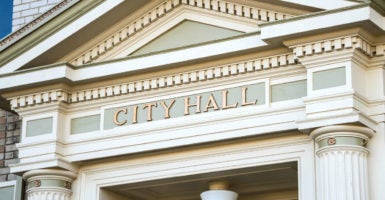 While change at the federal level is slow, conservatives have won decisive victories at the state level. (Photo: iStock Photos)

Slade O’Brien is vice president of the Grassroots Leadership Academy.

While much of the media focuses on lawmakers in Washington clunking heads and getting little done, the common narrative has been that change is a pipedream.

But great change is afoot. They just need to look outside Washington to find it.

At the local and state levels, citizen leaders, armed with a belief in economic freedom and individual liberty, have experienced historic successes over the past few years.

They’ve proven, as Alexis de Tocqueville noted nearly two centuries ago, that the collective force of an enlightened people, awakened to their interests, “will always be more powerful to produce social well-being than the authority of government.”

Look around and you’ll find stories of positive change playing out daily across this great nation, probably right in your own neighborhood.

In New Hampshire, grassroots leaders ushered in lower taxes, making it easier for businesses to flourish. In Arizona, activists made it possible for thousands of students and their families to choose schools that best cultivate their unique talents.

And in Ohio, they demanded lawmakers spend tax dollars more responsibly, spurring the House to successfully override the governor’s veto of the Healthy Ohio Program.

The momentum is encouraging. But in our system, government goes to those who show up. The fight for freedom requires constant vigilance.

And right now, our nation is at a crossroads.

In a poll last year, 51 percent of 18- to 29-year-olds said they did not support capitalism—a troubling statistic, and surprising when you consider how warmly they embrace the fruits of capitalism: iPhones, Starbucks, Uber, and Amazon, to name a few.

I suspect what they actually reject is crony capitalism and Wall Street bailouts, whereby special interests benefit from an overgrown government capable of granting favors to the well-connected few at the expense of hardworking Americans.

I reject that too.

Greater economic freedom and individual liberty are the best weapons with which to fight back. And when this point is effectively communicated to local communities, states, and all Americans, great things can happen.

Consider Davenport, Iowa, where grassroots leaders persuaded the community to come together and challenge the city’s onerous zoning laws.

Without their efforts, local government would have shut down Timothy’s House of Hope, an outreach organization committed to “helping the hungry, hurting and homeless one need at a time.” Today, the shelter is open and continues to serve the most vulnerable in that community.

Or look to Mississippi, where grassroots leaders helped their friends and neighbors to understand how occupational licensing requirements were limiting opportunity for thousands of low- and middle-income workers.

The Magnolia State was once among the more excessively licensed states in the country, according to the Institute for Justice. To become a landscape contractor there required more than two years of education and experience.

But as people grew to realize the cost of these restrictions, things began to change. Today, Mississippi leads the nation in occupational licensing reform, and thousands more can now enter the workforce and improve their lives.

And so much more can be done.

These days, Americans are paying greater attention to the political process and getting increasingly frustrated. So many yell at the nightly news, then throw their hands up in the air, and do nothing.

It’s not laziness or a shirking of civic responsibility. Often, they just have no clue how or where to begin.

We need effective grassroots leaders who understand the vision of a free society to step up, and show like-minded friends and neighbors how to channel their frustration into productive action.

>>> Check out the Grassroots Leadership Academy, a multilevel program that teaches activists how to recruit and educate local volunteers.

It’s going to take thousands of local leaders to grow a movement of millions. Are you ready to lead?

Now is a great time to start a dialogue in your community about economic freedom, individual liberty, and limited government.

Ben Franklin once said, “one man of tolerable abilities may work great changes.” Don’t sell yourself short. Get involved. You just might save the country.