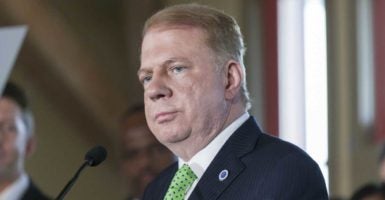 Seattle Mayor Ed Murray, a Democrat, reached out to the University of California, Berkeley economics department asking it to rush the release of a study that cast a positive light on Seattle’s increased minimum wage ordinance.(Photo: Paul Gordon/Zuma Press/Newscom)

The Seattle mayor’s office coordinated with a University of California, Berkeley economist to manipulate a study on the effects of a $15 minimum wage for maximum political benefit, according to emails obtained by the Employment Policies Institute.

A staffer for Democratic Mayor Ed Murray reached out to the university’s economics department asking it to rush the release of a study, released in June, that cast a positive light on Seattle’s increased minimum wage ordinance.

The study’s findings contradicted those of a then-forthcoming University of Washington study, which found that Seattle’s increased minimum wage had cost low-skill workers $179 per month and hurt employment numbers. Murray’s office also explicitly asked Berkeley economist Michael Reich to remove all mentions of the University of Washington study so as not to aid in its dissemination.

“Leave the critique of the UW study until later,” mayoral staffer Carlo Caldirola-Davis said in an email obtained by the Employment Policies Institute through a public records request. “The release still calls out the UW study. Don’t want your positive news to serve as a teaser for the UW study.”

The obtained email exchange reveal Reich was cooperative, tailoring the content of his study based on requests made by Murray’s office.

“I changed the UW references to be about their report from Nov. 2016. Is that OK? Could put them in a para. rather than as bullets. Or take them out altogether,” Reich said in an email.

“These emails are further proof that the Berkeley team is motivated by ideology, not evidence,” Saltsman told The Washington Free Beacon. “The contrast with the University of Washington team is not a flattering one: While Berkeley rushed its results to meet a political timeline, the UW team took its time to solicit scholarly feedback to refine its results.”