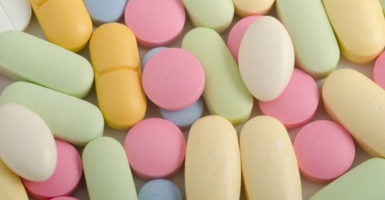 A report by the White House drug commission provides a litany of early actions the administration should take, including granting waivers to states to eliminate barriers to treatment for everyone struggling with addiction, and boosting funding for state supplies of the opioid reversal drug Narcan. (Photo: iStock Photos)

The commission, headed by Republican Gov. Chris Christie of New Jersey, delivered its interim recommendations Monday on what the Trump administration can do to tackle the worsening epidemic.

The report provides a litany of early actions the administration should take, including granting waivers to states to eliminate barriers to treatment for everyone struggling with addiction, and boosting funding for state supplies of the opioid reversal drug Narcan, reports The New York Times.

The “most urgent recommendation,” however, is to declare an immediate state of emergency for the nation. The commission said Monday the president is the “only person who can bring this type of intensity to the emergency and we believe you have the will to do so and to do so immediately.”

“With approximately 142 Americans dying every day, America is enduring a death toll equal to September 11th every three weeks,” the commission said in the interim report Monday, adding:

Your declaration would empower your Cabinet to take bold steps and would force Congress to focus on funding and empowering the executive branch even further to deal with this loss of life. It would also awaken every American to this simple fact: If this scourge has not found you or your family yet, without bold action by everyone, it soon will.

Trump created the Commission on Combating Drug Addiction and the Opioid Crisis through an executive order March 29 and tapped Christie to lead the efforts. The executive order required interim recommendations for addressing opioid addiction within 90 days of creation and a final plan of action by Oct. 1.

The commission ignited criticism after it missed the first two deadlines to submit interim recommendations. Bertha Madras, a former deputy director of the Office of National Drug Control Policy serving on the opioid commission, said the delays were “trivial compared to the magnitude of the problems and types of solutions needed to formulate an effective response,” according to CBS News.

A recent STAT analysis predicts the annual death toll from opioids will rise by roughly 35 percent between 2015 and 2027. Its research predicts up to 500,000 people could die from opioids over the next decade. The experts agree, even in a best-case scenario, the crisis will not visibly start to subside until after 2020.