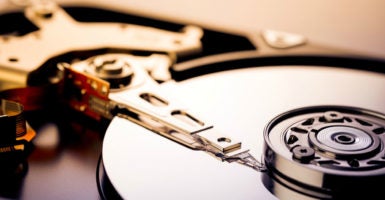 Federal law enforcement authorities may have already recovered and read whatever was on the smashed hard drives found at former congressional IT aide Imran Awan's home. (Photo: iStock Photos)

Somebody must have thought they were hiding something by smashing the computer hard drives the FBI recovered from the home of Imran Awan, the former information technology aide to Rep. Debbie Wasserman Schultz, D-Fla.

But odds are excellent they were wrong. Federal law enforcement authorities may have already recovered and read whatever was on those hard drives.

“It depends on what happens, but even if it is hit with a hammer, it probably doesn’t damage the platters that actually hold the data, which remains recoverable,” said Tom Hakim, engineering supervisor for WeRecoverData.com, a New York-based lab that specializes in difficult digital retrieval.

“In most cases, it’s very likely” the information on a smashed hard drive can be recovered “in two or three days, maybe a week,” Hakim said.

His lab, which does extensive work for law enforcement and Fortune 500 corporations, has also recovered data from disks that were in fires and that had been submerged in water.

That may be bad news for Pakistani-born Awan. He and his younger brothers; his wife, Hina Alvi; and his best friend, Rao Abbas, are criminal suspects in a federal investigation first made public in February. Investigators are looking into abuse of the congressional IT servers, including the possible transfer of data, emails, and files from the offices of dozens of House Democrats.

Awan had worked for Wasserman Schultz—who resigned in July 2016 as chairwoman of the Democratic National Committee after its IT system was hacked—since 2005. His relatives and friend had also worked on and off as congressional IT aides, being paid collectively more than $4 million from 2009 to 2016.

All five of the suspects lost access to the congressional IT system in February, and all of them were removed from office payrolls except Alvi, Awan’s wife, who left the country in March.

Wasserman Schultz didn’t fire Awan until the day after his arrest and appeared prepared to keep paying him in Pakistan had he not been arrested by the FBI on his way there.

In a related development Monday, the Foundation for Accountability and Civic Trust filed an ethics complaint with Congress against Wasserman Schultz because she kept Awan on her official office payroll for months after his IT access was terminated.

Other House Democrats fired Awan, his relatives, and friends while Wasserman Schultz continued employing him.

“There is something quite amiss as to why Congresswoman Debbie Wasserman Schultz continued to use taxpayer funds to employ former technology staff member Imran Awan, even months after he was barred from accessing the House’s computer systems and a number of her colleagues severed ties with Awan,” said Matthew Whitaker, the Foundation for Accountability and Civic Trust’s executive director.

“Since Awan’s arrest last week, Wasserman Schultz has been evasive and unable to answer even basic questions about the nature of Awan’s employment with her office. This only further confirms the urgency of an investigation into her unethical and illegal actions,” Whitaker said in a prepared statement released by the nonprofit watchdog for government ethics.

Whitaker is a former U.S. attorney for the Southern District of Iowa.

Also on Monday, Rep. Ron DeSantis, R-Fla., a key member of the House Committee on Oversight and Government Reform, called on lawmakers to assess the damage the IT vulnerabilities might have caused.

“Congress needs to know how this happened and what damage has been done. We have a responsibility to protect the House,” DeSantis said.

“The possibility that sensitive congressional information was compromised requires Congress to examine this matter,” the Florida Republican added.