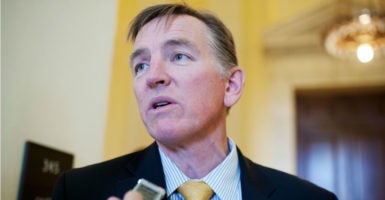 “There may be no more important policy change for our nation’s agriculture community than reducing its crushing federal regulatory burden,” reads the letter, organized in part by Rep. Paul A. Gosar, R-Ariz. (Photo: Tom Williams/CQ Roll Call/Newscom)

Lawmakers are leading an effort to do away with endangered species regulations that they say hurt farmers and ranchers without benefiting the targeted wildlife.

“We ask that your committees work together to address the numerous regulatory inefficiencies and statutory roadblocks in the agriculture community by modernizing the Endangered Species Act (ESA) and similarly outdated laws and regulations,” the letter reads. “These much-needed updates would ease the stranglehold on farmers and ranchers who often face the brunt of these job-killing mandates.”

The Endangered Species Act, passed in 1973, was enacted to protect species threatened by extinction.

“In a nutshell, what the [Endangered Species Act] is supposed to do, is you identify a species that is endangered or threatened with extinction … then you put it on a list and then the government has certain regulatory authorities and other things it can do that is supposed to fix the thing up and take it off the list,” Robert Gordon, a senior research fellow at The Heritage Foundation, told The Daily Signal in an email.

The law has not been successful, Gordon said.

“Not that many [species] come off [the list],” Gordon said. “A little bit of a one-way street, you know. It’s like you check lots and lots of patients into the hospital but not a lot of them come out cured.”

Johnson told The Daily Signal in a phone interview that the letter is about building support to combat the Endangered Species Act and bring better ideas to the table.

“We’re just starting what we believe is the obvious point that we’ve got to get the committees to work together as a priority to address these numerous regulatory inefficiencies and statutory roadblocks that have gotten in the way of our agriculture community,” Johnson said. “The Endangered Species Act is really just an out-of-control measure that is not very effective and it desperately needs to be modernized so that it can work in a way that benefits everyone, and that’s just not happening right now.”

Sen. John Barrasso, R-Wyo., recently said during a committee oversight hearing that the law is not meeting its objective:

Of 1,652 species of animals and plants in the U.S. listed as either endangered or threatened since the law was passed in 1973, only 47 species have been delisted due to recovery of the species.

Barrasso, who is an orthopedic surgeon, said the lack of success under the Endangered Species Act is unjustifiable.

“As a doctor, if I admit 100 patients to the hospital and only three recover enough under my treatment to be discharged, I would deserve to lose my medical license,” Barrasso said.

The law prohibits farmers from using their property, the writers say.

“This clear failure of the existing [Endangered Species Act] is compounded by attacks on property rights through substantial federal restrictions on land use, and the ESA’s one-size-fits-all approach to species protection that has little regard for solutions from states and local shareholders,” the letter reads.

In 2015, Colorado Gov. John Hickenlooper, a Democrat, sued the Obama administration over a bird called the Gunnison sage grouse, which is protected by the Endangered Species Act.

Over 25 years, Colorado officials spent more than $40 million to preserve the habitat of the Gunnison sage grouse, The Daily Signal previously reported.

The signers of the letter say they want to deregulate the industry so that farmers and ranchers will be able to do their job.

There may be no more important policy change for our nation’s agriculture community than reducing its crushing federal regulatory burden. If we adopt a system that induces and incentivizes thoughtful and collaborative regulation, farmers and ranchers will be empowered to do what they do best: produce food and other agriculture products in abundance for the American people and the rest of the world.

Gordon said he is hopeful for substantive change.

“The [Endangered Species Act] … hasn’t been good for conservation and is harmful to economic growth. Both these things can be improved if Congress musters the will,” Gordon said.