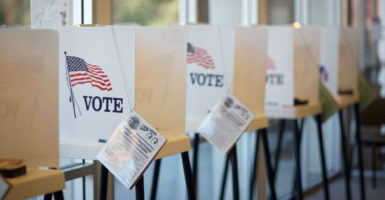 A new study on voting in the 2016 election found that in 21 states, 8,471 votes were “highly likely” duplicates. (Photo: iStock Photos)

A new bombshell study released by the Government Accountability Institute shows why President Donald Trump’s Advisory Commission on Election Integrity has such an important job ahead of it.

The institute concluded in its report that thousands of votes in the 2016 election were illegal duplicate votes from people who registered and voted in more than one state.

The Government Accountability Institute, founded by Peter Schweizer, author of “Clinton Cash,” seeks to “investigate and expose crony capitalism, misuse of taxpayer monies, and other governmental corruption or malfeasance.”

Over the last few months, the institute sought to obtain “public voter information” from every state in order to search for duplicate votes. This is the same type of information the president’s election integrity commission has requested.

With this report, we may have a clue as to why some states are resisting providing this data.

The Government Accountability Institute was able to obtain voter registration and voter history data from only 21 states because while some states shared it freely, “others impose exorbitant costs or refuse to comply with voter information requests.”

These 21 states represent “about 17 percent of all possible state-to-state comparison combinations.”

The institute compared the lists using an “extremely conservative matching approach that sought only to identify two votes cast in the same legal name.” It found that 8,471 votes in 2016 were “highly likely” duplicates.

Extrapolating this to all 50 states would likely produce, with “high-confidence,” around 45,000 duplicate votes.

The institute obtained this level of confidence by matching not only names and birthdays—which can be the same for different individuals—but also by contracting with companies, such as Virtual DBS, that have commercial databases to further cross-check these individuals using their Social Security numbers and other information.

According to the Government Accountability Institute’s experts, “the probability of correctly matching two records with the same name, birthdate, and Social Security number is close to 100 percent.” In fact, “using these match points will result in virtually zero false positives.”

The probability of 45,000 illegal duplicate votes is the low end of the spectrum, and it does not even account for other types of fraud such as ineligible voting by noncitizens and felons and absentee ballot fraud.

To put this number of fraudulent votes in perspective, Hillary Clinton won New Hampshire by fewer than 3,000 votes out of over 700,000 cast. Just this number of duplicate votes alone has the power to swing state results and, in turn, elections.

Unfortunately, New Hampshire refused to turn over its data for this study.

There have been other razor-tight elections in recent years. In 2000, the presidency was decided by 537 votes out of a total of 105 million cast. In 2008, Al Franken won his Minnesota Senate race by a mere 312 votes. He ended up being the deciding vote that gave this country Obamacare.

Though the institute did not look at the 2008 elections in this study, there is little doubt that the 2016 numbers show that duplicate voting and voter fraud are a real problem that can have serious consequential effects.

The Government Accountability Institute also used the state of Rhode Island as a test case. Over 30 percent of all registered voters in Rhode Island have no Social Security or driver’s license number on file.

While it is legal to register without providing this information, the institute notes that “confirming the identities of some of these voters is impossible using only the data contained in the state’s voter registration system.”

Without this “uniquely identifying information … there is no way to confirm a voter’s identity or citizenship … ” This shows the vulnerabilities that are ripe for any person or group wanting to take advantage of them.

The institute also found more than 15,000 voters registered at prohibited addresses “such as post office boxes, UPS stores, federal post offices, and public buildings.” In some cases, more than 100 voters “were registered to the same UPS store locations.”

The institute tried to bring some of these problems to the attention of Rhode Island election officials as part of its test case. It provided officials with a list of 225 voters who “were registered using prohibited addresses.”

But Rhode Island refused to do anything about the problem beyond sending a letter to the voters. If a voter did not respond, the state refused to take any further action.

Instead, in an obvious attempt to deter the Government Accountability Institute, the state said that the institute would have to file a “voter challenge” and would be subject to a misdemeanor penalty if it filed a “false challenge.”

The Government Accountability Institute points out that the quality of the voter registration data in some states is very poor, with missing and obviously incorrect information. The institute found 45,880 votes cast by individuals whose dates of birth were more than 115 years before the election.

Several hundred votes were cast by individuals whose registration birthdates “indicated they were under 18 years old at the time of the election,” although some of these were through provisional ballots.

All of this is just the latest evidence that we have serious, substantive problems in our voter registration system across the country and that voter fraud is, without a doubt, real.

The Heritage Foundation has a database that is being constantly updated. It documents nearly 1,100 proven instances of voter fraud, including cases where elections were overturned because of proven fraud.

This kind of work, which the Government Accountability Institute has done, will be invaluable to the Election Integrity Commission as it researches the registration and voting process and looks for ways to fix its vulnerabilities and security problems, enhance our democratic process, and make sure every eligible American votes and is not disenfranchised by illegal votes.

Election integrity and public confidence in the election process are fundamental to preserving our democratic republic.

Disclosure: Hans von Spakovsky is a member of the Presidential Advisory Commission on Election Integrity mentioned in this article.