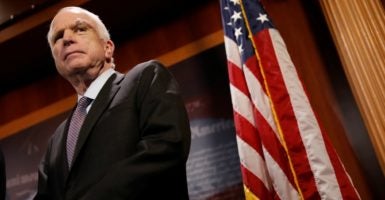 Sen. John McCain, R-Ariz., surprised many Republicans by voting with Lisa Murkowski, R-Alaska, and Susan Collins, R-Maine, to block a conference with the House on the fate of Obamacare. (Photo: Aaron P. Bernstein/Reuters/Newscom)

The “skinny repeal” bill managed to get only 49 votes, with every Democrat and the three Republicans voting against the scaled-down version of the repeal and replace bill.

“We told our constituents we would vote that way and when the moment came, most of us did,” McConnell said on the Senate floor. “Our friends on the other side decided early on they didn’t want to engage with us in a serious way to help those suffering under Obamacare.”

“I’m proud of the vote I cast tonight, consistent with what we told the American people we’ve been trying to accomplish in four straight elections if they gave us a chance.”

>>> Commentary: Congress Needs to Go Right Back to Work on Health Care Reform

McCain was a mystery up until the end.

“From the beginning, I have believed that Obamacare should be repealed and replaced with a solution that increases competition, lowers costs, and improves care for the American people,” the Arizona senator said in a statement after the vote. “The so-called ‘skinny repeal’ amendment the Senate voted on today would not accomplish those goals.”

“While the amendment would have repealed some of Obamacare’s most burdensome regulations, it offered no replacement to actually reform our health care system and deliver affordable, quality health care to our citizens.”

Collins, of Maine, and Murkowski, of Alaska, were expected to vote no, as both voted this week against even allowing debate on the matter. Murkowski voted in 2015 to repeal Obamacare when President Barack Obama was sure to veto the bill.

The “skinny repeal” would have eliminated or scaled back the most unpopular elements of Obamacare, such as the individual and employer mandates, and the medical device tax. It also would have defunded Planned Parenthood, the nation’s largest abortion provider.

President Donald Trump tweeted at 2:25 a.m. Friday that it’s time to just let Obamacare collapse, a sentiment he’s made in the past before recommitting to a repeal bill in Congress.

The main purpose of the “skinny repeal,” called the Health Care Freedom Act, was to keep the House-passed replacement legislation alive in order to get a conference committee to shape a final bill.

Vice President Mike Pence, who is the president of the Senate, arrived after 11:30 to cast a tie-breaking vote if necessary. Had McCain voted with his fellow Republicans, he would have been the 50th vote, and Pence would have cast the 51st vote.

The Republican-controlled Senate should still try to act to keep its promise, said Michael Needham, CEO of Heritage Action for America.

“Long before tonight, the Senate demonstrated a complete and utter inability to govern. Repealing and, ultimately, replacing Obamacare will require moderate Republicans to come to the table and follow through on their repeated campaign promises,” Needham said in a statement.

At this very moment, Americans are stuck with a failing health care law. Networks continue to narrow. Premiums continue to rise. And choice continues to decline. Obamacare is becoming a zombie law, and throwing more taxpayer money at Zombiecare is unacceptable.

The only way to force Senators back to the table is to block efforts to prop up Obamacare. After seven years of promises, Republicans cannot simply retreat to embracing the status quo.

Here’s a breakdown of what happened during the long night in the Senate.

1.) What the Skinny Bill Would Have Done

The Health Care Freedom Act was released after 10 p.m.

If passed, the bill would have: permanently eliminated the individual mandate to buy insurance and eliminated for eight years the mandate on employers to provide insurance; increased state flexibility to experiment with health reforms; provided a three-year extension for increasing what individuals can invest in health savings accounts, or HSAs; redirected Planned Parenthood money to community health care providers for one year; and eliminated the 2.3 percent tax on medical devices such as pacemakers for two years.

It was a dramatic late afternoon before debate began when Republican Sens. McCain, Lindsey Graham of South Carolina, and Ron Johnson of Wisconsin stated they wouldn’t support the bill without a guarantee the bill would go to conference committee.

This came after reports the House would immediately pass the “skinny repeal,” and send it to President Donald Trump, rather than use it as a step for further negotiation.

House Speaker Paul Ryan, R-Wis., first gave a noncommittal response, saying only: “Senators have made clear that this is an effort to keep the process alive, not to make law. If moving forward requires a conference committee, that is something the House is willing to do.”

Graham and Johnson voted for the “skinny bill.”

McCain earlier said he didn’t want to rush a partisan bill through the same way the Democratic Congress did in 2010. After the vote, he said he wasn’t assured by Ryan.

“The speaker’s statement that the House would be ‘willing’ to go to conference does not ease my concern that this shell of a bill could be taken up and passed at any time,” McCain said in his statement.

“I’ve stated time and time again that one of the major failures of Obamacare was that it was rammed through Congress by Democrats on a strict party-line basis without a single Republican vote. We should not make the mistakes of the past that has led to Obamacare’s collapse.”

Interestingly, McCain voted against a Democratic measure on the floor after midnight to send the bill to the Senate Health, Education, Labor and Pensions Committee for review, an amendment sponsored by Sen. Patty Murray, D-Wash.

Senate Minority Leader Charles Schumer, D-N.Y., sounded contrite about the partisan 2010 Obamacare process in a speech trying to peel off Republican support for sending the proposal back to committee.

There was one area where Republicans were successful in rolling back a provision of Obamacare.

Before the Health Care Freedom Act came to the floor, Sen. Dean Heller, R-Nev., proposed an amendment to permanently repeal the “Cadillac tax.” That was a provision of Obamacare that imposed a 40 percent excise tax on insurance plans with annual premiums higher than $29,500 for families.

Sen. Steve Daines, R-Mont., introduced an amendment early on for a single-payer health care system as a means of putting Democrats on the record.

Vermont Sen. Bernie Sanders, who has proposed a similar measure, was among the 43 senators to vote present. Democratic Sens. Joe Manchin of West Virginia, Joe Donnelly of Indiana, Jon Tester of Montana, and Heidi Heitkamp of North Dakota voted no with all Republicans. The measure failed 0-57.

McConnell spoke shortly before 2 a.m. after the “skinny repeal” failed about the single-payer system vote.

“Almost everybody voted present. Apparently they didn’t want to make a decision about whether they were for or against socialized medicine, a government takeover of everything, European health care,” McConnell said. “Only four of them weren’t afraid to say that wasn’t a good idea.”