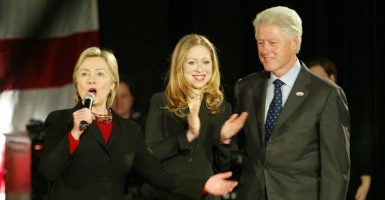 Chris Gowen, Imran Awan’s lawyer, is a longtime campaigner for former President Bill Clinton and former Secretary of State Hillary Clinton and a member of an attorney team that brought a fraudulent lawsuit against energy giant Chevron Corp.

Pakistani-born Imran was arrested late Monday at Dulles Airport in Northern Virginia before he could board a flight to Qatar and then Pakistan on bank fraud charges. Imran; his younger brothers, Abid and Jamal; his wife, Hina Alvi; and Rao Abbas, his best friend, have been subjects of a federal criminal investigation led by the U.S. Capitol Police and including the FBI since February 2017.

The investigation is focused on allegations the Awan group abused their access as congressional information technology administrators for dozens of Democratic members of the House of Representatives, including the former Democratic National Committee chairwoman, Rep. Debbie Wasserman Schultz of Florida.

Gowen described Imran’s arrest as “clearly a right-wing media-driven prosecution by a United States Attorney’s Office that wants to prosecute people for working while Muslim.”

Gowen is a founding partner of Gowen Rhoades Winograd & Silva law firm, with offices in Washington, D.C., and Philadelphia.

His official bio on the firm’s website notes that he “left the Public Defender’s office to work for former President William Jefferson Clinton and then-Senator Hillary Clinton. Chris was a fact checker for President Clinton’s memoir, ‘My Life.’”

“He also served as a traveling aid for President Clinton’s national and international trips. Chris finished his tenure with the Clintons by directing the advance operations for then-Senator Hillary Clinton during her 2008 presidential campaign.”

Conservative Review, which first reported Gowen’s extensive Clinton connections Wednesday, said they also include work for the Clinton Foundation and its Clinton Global Initiative and the Clinton Health Access Initiative.

Also noted on Gowen’s bio is his work in a class-action lawsuit against Chevron, a long-running litigation that culminated in a June 19 denial by the U.S. Supreme Court of an appeal by the lead attorney for a group of Ecuadorian citizens, Steven Donziger.

The Ecuadorians claimed damages caused by waste disposal practices by Texaco, which Chevron took over in 2000 in a $100 billion merger. Chevron refused to pay $9.5 billion in damages against Texaco in an Ecuadorian court. Donziger’s team sought to force Chevron to pay by taking the litigation to the U.S. court system.

But Donziger was convicted in 2014 in the U.S. District Court for the Southern District of New York for violating the federal Racketeer Influenced and Corrupt Organizations Act (RICO) and the Foreign Corrupt Practices Act in connection with money laundering, wire fraud, witness tampering, and obstruction of justice.

A federal appeals court upheld the convictions and the case was remanded to the U.S. Court of Appeals for the 2nd Circuit following the Supreme Court’s denial, which upheld the decision.

Gowen’s bio noted that “his efforts on behalf of the lawyers who represented thousands of indigent villagers in Ecuador received national and international notoriety.”

Gowen told The Daily Caller News Foundation’s Investigative Group Wednesday that he is no longer involved in the Ecuador case. He said he left the team “when my client hired appellate counsel—I still assisted the appellate counsel when they had questions.”

Had the Supreme Court accepted the appeal, Gowen said, “my firm would have certainly been involved to what ever level my client wished. We still find that case to be the greatest abuse of the civil justice system in our country’s history by Chevron and its team of lawyers.”