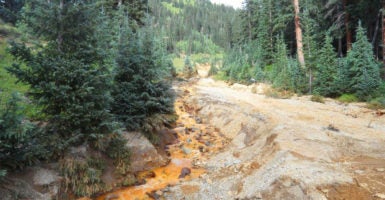 The Gold King Mine disaster, caused by EPA workers in August 2015, released 3 million gallons of toxic water into the Animas River in Colorado. (Photo: EPA/Zuma Press/Newscom)

After almost two years, the Environmental Protection Agency’s Office of Inspector General released its report on the Gold King Mine disaster that dumped over a million pounds of metals into the Animas River, turning dozens of miles of the river orange.

While inspectors general are tasked with finding out the truth and holding agencies accountable, this recently released report sheds no more light on the disaster than previous misleading reports.

EPA Administrator Scott Pruitt has inherited not only an environmental mess, but also the mess created by an agency more interested in its narrow self-interests than truth. Pruitt now has an opportunity to send a message that would ripple far beyond the EPA.

The inspector general’s report lauds the expertise of the EPA officials (known as on-scene coordinators) and their crew, and essentially repeats the EPA’s earlier claims.

The inspector general explains: “We were told by the on-scene coordinator and contractors on-site that they had no intention of opening the mine that day; rather, they were exposing the blockage and the bedrock to better assess conditions and determine next steps.”

The inspector general states that the on-scene coordinator who was on site “ … reported inadvertently excavating down to within a foot or two of the top of the [tunnel opening], which initiated an internal erosion failure that caused the release.”

There you have it: Experts “inadvertently … initiated an internal erosion failure.” It could have happened to anyone.

The line that the EPA crew never intended to breach the natural plug (blockage) is flatly contradicted by a recently released Interior Department email that includes an account that appears to have come from the main on-scene coordinator.

An attachment to the email states the “material catastrophically gave-way” when the EPA crew was “attempting to relieve hydrologic pressure” by “removing small portions of the natural plug.”

First, the inspector general addresses several factors that reportedly contributed to the EPA’s assumption that the mine was partially full of water and not pressurized.

The EPA had wrongly assumed that the floor of the mine was 6 feet lower than the ground outside. Consequently, the EPA had assumed that water would have to be more than 6 feet deep in the mine before it could flow out.

The assumption that the tunnels’ floor was recessed 6 feet was contradicted by available information and by the fact that the very purpose of the tunnel—more appropriately called an “adit”—was to drain the mine.

This fact is critical as regards the EPA’s decision to forego hydrostatic pressure testing before digging into the plug.

Second, the inspector general omits any reference to the fact that after unearthing the natural plug in the mine tunnel’s opening, the EPA crew reburied it.

This is inconsistent with the EPA’s story that the crew exposed the plug so that experts could later determine next steps. It could make sense, though, if one actually planned to dig a hole into the plug and stand back to see what happens.

In another account, the on-scene coordinator who was on site discussed what they did after removing all the rubble in front of the mine opening. Having reached the plug, he stated that:

The truth is we decided to avoid any contact with the blockage whatsoever and simply remove the loose dirt above the blockage for two reasons. First, to prevent it from falling down and covering what we had exposed and second, to reveal the bedrock above the blockage in order to better plan the next steps. [emphasis added]

He also stated: “ … we built a ramp of rock and soil up in front of and away from the blockage in order to work well above it to remove the dirt.” [emphasis added]

The inspector general report includes a photograph of the plug of compacted debris and rubble exposed on Aug. 4, 2015. A photo from Aug. 5 shows the mine site before the blowout. The plug can’t be seen in the latter photo.

Despite the on-site on-scene coordinator’s statements that they did not want dirt “falling down and covering” and that they built their ramp “away from” the plug, the plug can’t be seen because it was reburied.

By the time the EPA crew unearthed the plug, they likely realized the assumption about the recessed mine floor was wrong and, consequently, that their assumption that the mine was not full of pressurized water was baseless.

Perhaps they reburied the plug to reinforce it prior to digging into its top, but whatever the reason, the plug from the prior image was buried.

Third and finally, the inspector general lists several actions that were included in the instructions emailed between the main and on-site on-scene coordinators, but again makes an important omission.

Regarding steps to be taken at the mine tunnel, the inspector general states:

The lead [on-scene coordinator’s] instructions included steps to establish adit drainage control and to set up the water management system before removing any adit blockage. The instructions also included an option to excavate above the adit to investigate the slope. In his email, the final step listed in preparation for opening the mine was the adit face excavation. The lead [on-scene coordinator] explained that this meant removing loose material; it did not include excavating the blockage. [emphasis added]

It is true that the instructions that regarded “adit face excavation” (cleaning the rock around and above the tunnel opening) did not include “excavating the blockage.” Specific instructions regarding excavating blockage (i.e. “the plug”) are a few lines above in the very same memo.

The inspector general just slips past the steps that are to be taken “before removing any blockage at or below the 24 pipe.”

Notably, the instructions for removing the adit blockage do not impose restrictions on removing portions of the plug that were above the drain pipe. The reasoning behind this almost assuredly relates to EPA’s wrong-headed assumption of a recessed tunnel floor.

What Really Caused the Blowout?

EPA accounts have constantly shifted. Within moments of water bursting from the mine, a crew member recorded video capturing his conversation with another.

Now, with the inspector general’s most recent telling, the excavator bucket has somehow moved from “20 feet up” to “inadvertently” within a foot or two of the plugged mine entrance at the time of the disaster. It was not “inadvertent.”

Most if not all of these issues were covered in a report and documented in annotated photographs by the House Committee on Natural Resources, available since February of 2016—more than a year before the inspector general’s report.

The EPA crew definitely succeeded in relieving hydrostatic pressure, though they also polluted the river with a few million gallons of acid mine drainage and hundreds of thousands of pounds of metals.

There are gaping holes in the EPA’s fiction. If allowed to stand, the message will be that misleading, deceiving, and lying works, and that bureaucrats need not follow the laws they enforce on others.

If this second Gold King Mine mess is addressed, government officials who were at the site and those who created and promoted a false accounting will be put on notice that they must abide by laws and regulations they enforce, that they will be held accountable, and that public service means serving the public, not just your agency’s interests.

The message would ripple far beyond the EPA.